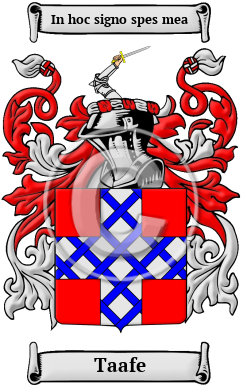 While this surname is generally regarded as Irish, we must look further back to properly understand its origin. Taafe is actually derived from the Welsh name Taaffe, which is a form of the personal name David and is related to the modern pet name Taffy. The Irish Gaelic form of the surname Taafe is Táth, which is pronounced, and indeed, often spelled, Taa.

Early Origins of the Taafe family

The surname Taafe was first found in County Louth (Irish: Lú) the smallest county in Ireland, located on the East coast, in the Province of Leinster where the family rapidly rose to positions of great importance shortly after their settlement during the Anglo-Norman invasion of Ireland. "Lord Taafe's ancestors were a Welsh family, who settled in Ireland at the English invasion." [1]

Sir Nicholas Taafe's grandson, Richard Taafe seated at Castle Lumpnagh was Sheriff of Dublin in 1295, and later Sheriff of County Louth in 1315. His son was Archbishop of Armagh. This line of early nobility continued well into the 14th and 15th centuries with more Sheriffs of Louth on record. [2]

Early History of the Taafe family

Church officials and medieval scribes often spelled early surnames as they sounded. This practice often resulted in many spelling variations of even a single name. Early versions of the name Taafe included: Taafe, Taaf, Taffe, Taffee, Taffie, Taffey and others.

Notable amongst the family up to this time was John Taaffe, 1st Viscount Taaffe (died before 1641); Theobald Taaffe, 1st Earl of Carlingford (c. 1603-1677), 2nd Viscount Taaffe, of Corren and 2nd Baron of Ballymote between 1642 and 1661, Irish Royalist officer who played a prominent part in the Wars of the Three Kingdoms, and accompanied Charles II in exile. Upon the Restoration, he was created 1st Earl of Carlingford; and Francis Taaffe, 3rd Earl of Carlingford (1639-1704), Irish army commander and politician. John Taaffe (fl. 1685-1708), was an Irish informer and Irish priest whose real name is said to have...
Another 128 words (9 lines of text) are included under the topic Early Taafe Notables in all our PDF Extended History products and printed products wherever possible.

Taafe migration to the United States +

In the mid-19th century, Ireland experienced one of the worst periods in its entire history. During this decade in order to ease the pressure of the soil, which was actually depleted by the effects of the previous years' grain crops, landowners forced tenant farmers and peasants onto tiny plots of land that barely provided the basic sustenance a family required. Conditions were worsened, though, by the population of the country, which was growing fast to roughly eight million. So when the Great Potato Famine of the mid-1840s hit, starvation and diseases decimated the population. Thousands of Irish families left the country for British North America and the United States. The new immigrants were often accommodated either in the opening western frontiers or as cheap unskilled labor in the established centers. In early passenger and immigration lists there are many immigrants bearing the name Taafe:

Taafe Settlers in United States in the 19th Century

Taafe Settlers in Canada in the 19th Century

Taafe Settlers in Australia in the 19th Century

Motto: In hoc signo spes mea
Motto Translation: In this sign is my hope.