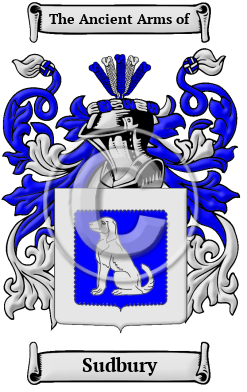 The ancestry of the name Sudbury dates from the ancient Anglo-Saxon culture of Britain. It comes from when the family lived in one of the settlements called Sudbury in the counties of Derbyshire, Middlesex, and Suffolk. The surname Sudbury belongs to the large category of Anglo-Saxon habitation names, which are derived from pre-existing names for towns, villages, parishes, or farmsteads.

Early Origins of the Sudbury family

The surname Sudbury was first found in Suffolk at Sudbury, a borough and market-town, and the head of a union, locally in the hundred of Babergh. "This place, originally called South Burgh, is of great antiquity, and at the period of the Norman survey was of considerable importance, having a market and a mint. A colony of the Flemings who were introduced into this country by Edward III. for the purpose of establishing the manufacture of woollen-cloth, settled here, and that branch of trade continued to flourish for some time. " [1]

The Domesday Book survey in 1086 A.D. list Sudbury as being held by William the Chamberlain and Otto the Goldsmith from the King. The village consisted of a mill, a market, 2 horses, 24 pigs, and 120 sheep. It is the site of the ancient church of St. Gregory's founded by St. Felix in the 7th century. [2]

One of the first records of the names was Hugh de Suthberia who was listed in the Pipe Rolls in 1159. [3] The Hundredorum Rolls of 1273 list: Robert de Sudbyr in Norfolk; and Ralph de Sudebyre in Essex. [4]

Simon of Sudbury (died 1381), was "Archbishop of Canterbury, son of Nigel Theobald and his wife Sarah, people of respectable position, born at Sudbury in Suffolk in the parish of St. Gregory. " [5]

William Sudbury (fl. 1382), was an early English theologian, a Benedictine monk of Westminster, and graduated as doctor of divinity at Oxford, where he was an opponent in theology in 1382. [5]

Early History of the Sudbury family

This web page shows only a small excerpt of our Sudbury research. Another 51 words (4 lines of text) covering the years 1379, 1431, 1375 and 1381 are included under the topic Early Sudbury History in all our PDF Extended History products and printed products wherever possible.

Spelling variations in names were a common occurrence before English spelling was standardized a few hundred years ago. In the Middle Ages, even the literate spelled their names differently as the English language incorporated elements of French, Latin, and other European languages. Many variations of the name Sudbury have been found, including Sudbury, Sudbery, SudBerry, Sudberey and others.

Another 27 words (2 lines of text) are included under the topic Early Sudbury Notables in all our PDF Extended History products and printed products wherever possible.

Sudbury migration to the United States +

Families began migrating abroad in enormous numbers because of the political and religious discontent in England. Often faced with persecution and starvation in England, the possibilities of the New World attracted many English people. Although the ocean trips took many lives, those who did get to North America were instrumental in building the necessary groundwork for what would become for new powerful nations. Some of the first immigrants to cross the Atlantic and come to North America bore the name Sudbury, or a variant listed above:

Sudbury Settlers in United States in the 17th Century