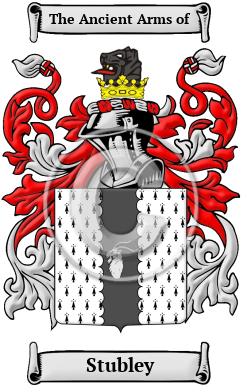 Early Origins of the Stubley family

Early History of the Stubley family

This web page shows only a small excerpt of our Stubley research. Another 82 words (6 lines of text) covering the years 1455, 1487, 1510, 1600 and 1552 are included under the topic Early Stubley History in all our PDF Extended History products and printed products wherever possible.

Distinguished members of the family include the Stubbey family of Norfolk. For those interested in further research of the early history of the surname we recommend the ancient Harleian Manuscripts which are in the archives of the British Museum...
Another 39 words (3 lines of text) are included under the topic Early Stubley Notables in all our PDF Extended History products and printed products wherever possible.

Stubley Settlers in Australia in the 19th Century

Stubley Settlers in New Zealand in the 19th Century