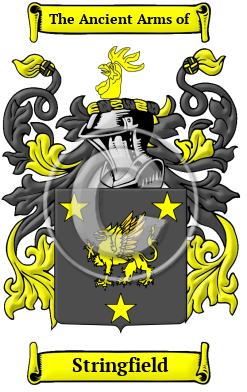 The name Stringfield is of Anglo-Saxon origin. It was name for a strong person. Stringfield is a nickname surname, which belongs to the category of hereditary surnames. Nicknames form a broad and miscellaneous class of surnames, and can refer directly or indirectly to one's personality, physical attributes, mannerisms, or even their habits of dress. This surname derives from the Old English words streng and felaw, which mean strong and fellow. However, some believe that the name was an occupational name for "the stringer, a marker of bow-strings." [1] As far as the origin of the name, this source continues "All surnames with the suffix '-fellow' seem to have sprung from the North of England, especially from co. York."

Early Origins of the Stringfield family

The surname Stringfield was first found in Yorkshire where they held a family seat. This curious name emerged during the 12th century when it was the custom to adopt a nickname to assert one's prowess and stature in battle. Notable amongst this type of name was Strongbow, sobriquet of the Earl of Pembroke in his invasion of Ireland in 1172. Strongitharm may be a corruption of one English branch of the Scottish Clan Armstrong. Strongfellow, the first version of Stringfellow, and conjecturally all three names are of the Yorkshire branch of Armstrong. Both Strongfellow and Stringfellow have registered the same Coat of Arms and thus seals the obvious connection between these two names. The Yorkshire reference is of no doubt as early rolls revealed: John le Strengfelagh was listed in the Court Rolls of the Manor of Wakefield; [2] Laurencius Stryngefelagh was listed in the Yorkshire Poll Tax Rolls in 1379 [1]; and finally John Strynefelowe was listed in Yorkshire in 1489. Some of the family appeared in Cheshire in early times too, as seen by John le Stengfelagh in 1308; and John Strengfellow, of Openshaw, who was listed in the Wills of Chester in 1616. The same the same source listed Richard Strengfellow, of Rochdale in 1617.

Early History of the Stringfield family

This web page shows only a small excerpt of our Stringfield research. Another 34 words (2 lines of text) covering the years 1530, 1799 and 1883 are included under the topic Early Stringfield History in all our PDF Extended History products and printed products wherever possible.

Spelling variations in names were a common occurrence before English spelling was standardized a few hundred years ago. In the Middle Ages, even the literate spelled their names differently as the English language incorporated elements of French, Latin, and other European languages. Many variations of the name Stringfield have been found, including Strongfellow, Stringfellow and others.

More information is included under the topic Early Stringfield Notables in all our PDF Extended History products and printed products wherever possible.

In the United States, the name Stringfield is the 10,150th most popular surname with an estimated 2,487 people with that name. [3]

Migration of the Stringfield family

Families began migrating abroad in enormous numbers because of the political and religious discontent in England. Often faced with persecution and starvation in England, the possibilities of the New World attracted many English people. Although the ocean trips took many lives, those who did get to North America were instrumental in building the necessary groundwork for what would become powerful new nations. Among early immigrants of the Stringfield surname to cross the Atlantic and come to North America were: John Stringfellow who landed in Pennsylvania in 1682; another John Stringfellow, who landed in Philadelphia, Pennsylvania in 1858; Joseph Stringfellow, who came to Philadelphia in 1866.