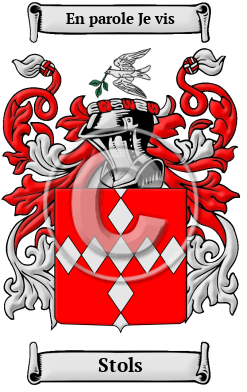 Early Origins of the Stols family

The surname Stols was first found in Gloucestershire of Somerset where they held a family seat from ancient times as Lords of the manor of Catherston. West Stowell in Wiltshire is now known as Alton-Priors.

The Somerset is the oldest location dating back to the Domesday Book of 1086 when it was known as Stanwelle. [2]

One of the first records of the family was Geoffrey de Stawelle, Somerset, 1 Edward III (recorded during the first year's reign of King Edward III.) [3]

Some of the family were also found in Jacobstow, Cornwall. "The manor of Penhallam, which extends into the parishes of Poundstock, Week St. Mary, and Boyton, was formerly in the family of Newell of Somerset. Norden describes it as the seat of Sir John Stawell, then lately deceased. Lysons, when speaking of Penhallam, supposes that it came into the family of Sir John Stawell, by a match with the heiress of a Cornish family called Beaupre, or Belloprato. This circumstance probably drew this family from Somersetshire, and occasioned their settling in Cornwall." [5]

Early History of the Stols family

Distinguished members of the family include Sir John Stawell or Stowell (1599-1662), an English Member of Parliament and Royalist Governor of Taunton during the English Civil War. He was second but eldest surviving son of Sir John Stawell of Cotholstone, Somerset, by his wife Elizabeth. "The family had long been settled...
Another 50 words (4 lines of text) are included under the topic Early Stols Notables in all our PDF Extended History products and printed products wherever possible.

Migration of the Stols family to Ireland

Some of the Stols family moved to Ireland, but this topic is not covered in this excerpt.
Another 56 words (4 lines of text) about their life in Ireland is included in all our PDF Extended History products and printed products wherever possible.

Stols migration to the United States +

Stols Settlers in United States in the 19th Century

Stols Settlers in United States in the 20th Century