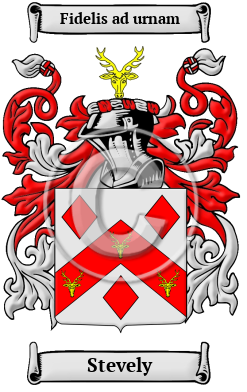 The present generation of the Stevely family is only the most recent to bear a name that dates back to the ancient Anglo-Saxon culture of Britain. Their name comes from having lived in one of the various places called Staveley in the counties of Derbyshire, Lancashire, and Westmorland, and in the West Riding of Yorkshire. The surname Stevely belongs to the large category of Anglo-Saxon habitation names, which are derived from pre-existing names for towns, villages, parishes, or farmsteads.

Early Origins of the Stevely family

The surname Stevely was first found in Derbyshire at Staveley, a town within the borough of Chesterfield which literally means "wood or clearing where staves are got" from the Old English "staef" + "leah." [1] The town was listed in the Domesday Book of 1086 as Stavelie. [2]

Staveley is also a village and civil parish in the Harrogate district of North Yorkshire and this village also dates back to the Domesday Book where it is listed as Stanlei. These are the oldest references to the place name but there are others scattered throughout England.

Some of the family held a family seat at Stalybridge in Cheshire. "The name of Staly, originally Staveleigh, is derived from an ancient family who, in the reign of Edward III., occupied Stayley Hall, a portion of which mansion still remains; the addition arises from a bridge over the Tame, that connects the two counties, and which has been rebuilt." [3]

Early History of the Stevely family

This web page shows only a small excerpt of our Stevely research. Another 118 words (8 lines of text) covering the years 1498, 1613, 1626, 1678 and 1678 are included under the topic Early Stevely History in all our PDF Extended History products and printed products wherever possible.

Until the dictionary, an invention of only the last few hundred years, the English language lacked any comprehensive system of spelling rules. Consequently, spelling variations in names are frequently found in early Anglo-Saxon and later Anglo-Norman documents. One person's name was often spelled several different ways over a lifetime. The recorded variations of Stevely include Staveley, Stavely, Staley, Stayley, Staveleigh and many more.

Notables of this surname at this time include: Thomas Staveley, High Sheriff of Leicestershire in 1613; and Thomas Staveley (born 1626), antiquary and church historian of East Langton Leicestershire. William Stayley or Staley (died 1678), was a victim of the 'Popish Plot,' was the son of William Staley, and carried on his father's business as goldsmith and banker in Covent Garden. In September 1678, he was accused of high treason, but was offered to suppress the charge in consideration of the sum of 200 shillings. "The banker laughed at the insolence of the...
Another 92 words (7 lines of text) are included under the topic Early Stevely Notables in all our PDF Extended History products and printed products wherever possible.

Migration of the Stevely family to Ireland

Some of the Stevely family moved to Ireland, but this topic is not covered in this excerpt.
Another 34 words (2 lines of text) about their life in Ireland is included in all our PDF Extended History products and printed products wherever possible.

Migration of the Stevely family

Thousands of English families boarded ships sailing to the New World in the hope of escaping the unrest found in England at this time. Although the search for opportunity and freedom from persecution abroad took the lives of many because of the cramped conditions and unsanitary nature of the vessels, the opportunity perceived in the growing colonies of North America beckoned. Many of the settlers who survived the journey went on to make important contributions to the transplanted cultures of their adopted countries. The Stevely were among these contributors, for they have been located in early North American records: Elizabeth Staveley landed in America in 1760; John Stavelie settled in Philadelphia, Pennsylvania 1834; Edward Stavely settled in New Castle Del. in 1839.