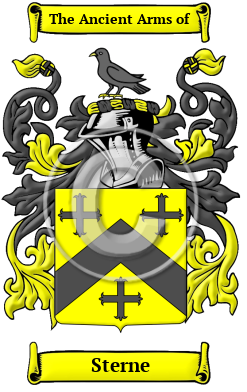 The name Sterne was formed many centuries ago by the ancient Anglo-Saxon tribes of Britain. It was a name typically given to a stern person. The surname Sterne is derived from the Old English word styrne, which means severe, strict, uncompromising, and austere.

Early Origins of the Sterne family

The surname Sterne was first found in Buckinghamshire where they held a family seat as Lords of the manor of Grendon from early times.

Early History of the Sterne family

Before English spelling was standardized a few hundred years ago, spelling variations of names were a common occurrence. Elements of Latin, French and other languages became incorporated into English through the Middle Ages, and name spellings changed even among the literate. The variations of the surname Sterne include Sterne, Stern, Stearn, Stearns and others.

Notables of the family at this time include John Sterne, Bishop of Colchester in 1592 and held the post until his death in 1607; and Richard Sterne (c. 1596-1683), English Church of England priest, Bishop of Carlisle in 1660, Archbishop of York from 1664 to 1683. He was the alleged author of the 'Whole Duty of Man.' [1] "On the outbreak of the civil war, Sterne zealously adopted the royalist cause, and in August 1642 he arranged for the despatch of large quantities of college plate to the king. Cromwell, however, who, as one of the burgesses of Cambridge, was engaged...
Another 146 words (10 lines of text) are included under the topic Early Sterne Notables in all our PDF Extended History products and printed products wherever possible.

Migration of the Sterne family to Ireland

Some of the Sterne family moved to Ireland, but this topic is not covered in this excerpt.
Another 173 words (12 lines of text) about their life in Ireland is included in all our PDF Extended History products and printed products wherever possible.

Sterne migration to the United States +

Sterne Settlers in United States in the 17th Century

Sterne Settlers in United States in the 18th Century

Sterne Settlers in United States in the 19th Century

Sterne Settlers in United States in the 20th Century

Sterne Settlers in Canada in the 20th Century

Historic Events for the Sterne family +