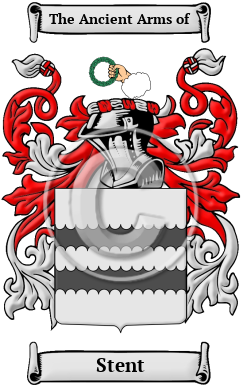 The name Stent is an old Anglo-Saxon name. It comes from when a family lived in the parish of Staines in the counties of Middlesex and Surrey. The latter appears in the Domesday Book [1] as "Stanes" derived from the Old English word "stan" and meant "place at the stones". [2]

One of the first records of the name was Sir William Staine who married into the Yarboroughs of Heslington Hall about the year 1100.

Early Origins of the Stent family

The surname Stent was first found in Middlesex at Staines, a market-town and parish, and the head of a union, in the hundred of Spelthorne. [3] [4] [5] [6]

Staines-upon-Thames, commonly referred to simply as Staines, is a town on the River Thames in the borough of Spelthorne in Surrey (in the historic county of Middlesex.)

Early records also revealed Richard of Staines (or Richard de Stanes) (d. 1277), a English clerical judge who acted as an Itinerant Justice, then was appointed justice of the Court of King's Bench in 1209 and finally Lord Chief Justice in 1269.

Later Yorkshire was a place of note to the family. They may have given their name to a number of places in Yorkshire including several Staintons, Stainland, Stainforth or Stainburn.

The Hundredorum Rolls of 1273 include: Richard de Stanes in Kent [4] and later William de Staines, Kent, Henry III- Edward I (during the reign from Henry III-Edward I) [7]

Over in Norfolk, William de Stanes, was rector of Welborne, Norfolk in 1328. [8]

Early History of the Stent family

Before the last few hundred years, the English language had no fast system of spelling rules. For that reason, spelling variations are commonly found in early Anglo-Saxon surnames. Over the years, many variations of the name Stent were recorded, including Stain, Staine, Staines, Stane, Stanes, Stayn and others.

Distinguished members of the family include Sir Thomas Staines of Thanet; and Peter Stent (c. 1613-1665), from the early 1640s until his death, he was one of the largest printsellers in London. He died in the Great Plague of London and his business was taken over by John Overton. Sir Thomas Staines (1776-1830), Captain in the Navy, was born near Margate in 1776, and entered the navy in December 1789 on board the Solebay, in which he served on the West India station till May 1792. In December he joined the Speedy brig commanded by Captain Charles Cunningham, with whom he went...
Another 341 words (24 lines of text) are included under the topic Early Stent Notables in all our PDF Extended History products and printed products wherever possible.

Stent migration to the United States +

To escape oppression and starvation at that time, many English families left for the "open frontiers" of the New World with all its perceived opportunities. In droves people migrated to the many British colonies, those in North America in particular, paying high rates for passages in cramped, unsafe ships. Although many of the settlers did not make the long passage alive, those who did see the shores of North America perceived great opportunities before them. Many of the families that came from England went on to make essential contributions to the emerging nations of Canada and the United States. Research into various historical records revealed some of first members of the Stent family emigrate to North America:

Stent Settlers in United States in the 17th Century

Stent Settlers in Australia in the 19th Century

Stent Settlers in New Zealand in the 19th Century