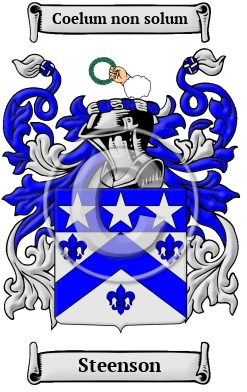 The ancestors of the Steenson family come from the ancient Scottish kingdom of Dalriada. The family name comes from Steven, and means son of Steven, a variant of Stephen, which meant crown or garland. [1] This personal name was popular throughout Christian Europe during the Middle Ages, mostly due to St. Stephen, the first Christian martyr. The name was Gaelicized as Mac Stiofáin.

Early Origins of the Steenson family

The surname Steenson was first found in Northumberland, where they were established since the early Middle Ages at Knaresdale Hall, and at Newcastle on Tyne. By 1150, they had moved north to Scotland in the parish of Newlands in Peebles (now part of the Strathclyde and Border regions), where Stevene Stevenson swore an oath of allegiance (recorded on the Ragman Rolls) to King Edward I of England during the latter's brief conquest of Scotland in 1296. Another early Scottish record of this surname dates back to 1372, when one Nichol fiz ('son of') Steven, chaplain of Scotland, was given a license to take shipping at London or Dovorre. [2]

The name is "confined for the most part to the northern half of England, being especially frequent in county Durham, and afterwards in the North and East Ridings and Northumberland. It is also well established in Lincolnshire, and has made a substantial advance into the midlands as far as Warwickshire. Strangely enough it has an independent home in Sussex and Berks, where Stevens is also common. Generally speaking, however, it is absent or rare in the southern part of England, where its place is supplied by Stephens and Stevens. The Stevensons extend in force across the Scottish border, but do not usually reach beyond the Forth and the Clyde." [3]

Early History of the Steenson family

More information is included under the topic Early Steenson Notables in all our PDF Extended History products and printed products wherever possible.

Migration of the Steenson family to Ireland

Some of the Steenson family moved to Ireland, but this topic is not covered in this excerpt.
Another 81 words (6 lines of text) about their life in Ireland is included in all our PDF Extended History products and printed products wherever possible.

Steenson migration to the United States +

Dalriadan families proliferated in North America. Their descendants still populate many communities in the eastern parts of both the United States and Canada. Some settled in Canada as United Empire Loyalists, in the wake of the American War of Independence. Families on both sides of the border have recovered much of their heritage in the 20th century through Clan societies and highland games. Analysis of immigration records indicates that some of the first North American immigrants bore the name Steenson or a variant listed above:

Steenson Settlers in United States in the 18th Century

Steenson Settlers in United States in the 19th Century

Steenson Settlers in Canada in the 19th Century

Steenson Settlers in Australia in the 19th Century

Steenson Settlers in New Zealand in the 19th Century