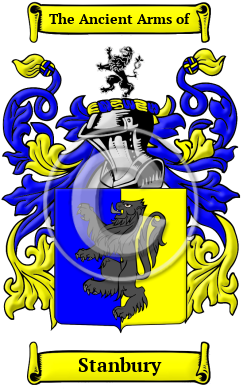 The illustrious surname Stanbury finds its origin in the rocky, sea swept coastal area of southwestern England known as Cornwall. Although surnames were fairly widespread in medieval England, people were originally known only by a single name. The process by which hereditary surnames were adopted is extremely interesting. As populations grew, people began to assume an extra name to avoid confusion and to further identify themselves. Under the Feudal System of government, surnames evolved and they often reflected life on the manor and in the field. Lords and their tenants often became known by the name of the feudal territory they owned or lived on. Unlike most Celtic peoples, who favored patronymic names, the Cornish predominantly used local surnames. This was due to the heavy political and cultural influence of the English upon the Cornish People at the time that surnames first came into use. Local surnames were derived from where a person lived, held land, or was born. While many Cornish surnames of this sort appear to be topographic surnames, which were given to people who resided near physical features such as hills, streams, churches, or types of trees, many are actually habitation surnames derived from lost or unrecorded place names. The name Stanbury is a local type of surname and the Stanbury family lived at the manor of Stanbury in Morwinstowe, Cornwall. The name could have from an Old English woman's name for Stanburh 'stone-fortress' [1] or literally meant "the fort or defence of stone." [2]

Early Origins of the Stanbury family

The surname Stanbury was first found in Essex where the first record of the family was found in the Domesday Book of 1086 where Stamburc was listed. [3]

Early History of the Stanbury family

Notable amongst the family at this time was John StanBerry (or Stanbury) (died 1474), English medieval Bishop of Bangor (1448-1453) and Bishop of Hereford (1453-1474.) He was second son of Walter Stanbury of Morwenstow, Cornwall, by his wife Cicely. He entered the Carmelite order, and was educated at Exeter College, Oxford, whence he graduated D.D. (Boase, Reg. Coll. Exon. pp. lxix, 367). He subsequently gained great reputation by his lectures at Oxford, and before 1440 he became confessor to Henry VI. In that year he was nominated first provost of Eton College, in the foundation of which he had advised Henry...
Another 114 words (8 lines of text) are included under the topic Early Stanbury Notables in all our PDF Extended History products and printed products wherever possible.

Stanbury migration to the United States +

An examination into the immigration and passenger lists has discovered a number of people bearing the name Stanbury:

Stanbury Settlers in United States in the 17th Century

Stanbury Settlers in United States in the 18th Century

Stanbury Settlers in United States in the 19th Century

Stanbury Settlers in Canada in the 18th Century

Stanbury Settlers in Australia in the 19th Century

Stanbury Settlers in New Zealand in the 19th Century

Stanbury Settlers in West Indies in the 17th Century