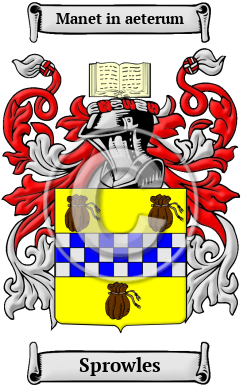 Early Origins of the Sprowles family

The surname Sprowles was first found in Dumbartonshire in central Scotland where they held a family seat from ancient times.

Early History of the Sprowles family

More information is included under the topic Early Sprowles Notables in all our PDF Extended History products and printed products wherever possible.

Migration of the Sprowles family to Ireland

Some of the Sprowles family moved to Ireland, but this topic is not covered in this excerpt.
Another 74 words (5 lines of text) about their life in Ireland is included in all our PDF Extended History products and printed products wherever possible.

Migration of the Sprowles family

Some of the first settlers of this family name or some of its variants were: Robert Sprewell settled in Nevis in 1663; William Spreul settled in New Jersey in 1685; Adam Sproule settled in Boston, Massachusetts in 1774. Andrew Sproull in 1798..