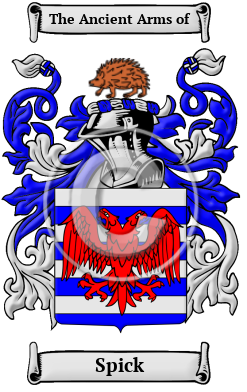 Spick is one of the names carried to England in the great wave of migration from Normandy following the Norman Conquest in 1066. It is based on the Norman given name Espec.

Early Origins of the Spick family

The surname Spick was first found in Lancashire where a Norman noble Le Espec was an under tenant of Roger de Poitou, and was granted the lands of Speke outside Liverpool in Lancashire. Soon after the taking of the Domesday Book in 1086, a descendant, Richard Le Espec acquired the manors of Wenworthy and Brampton Speke in the county of Devon, [1] which he held from Robert Fitzroy of Oakhampton. His descendent, William Le Espec married and acquired the estates of Gervois.

Walter Espec (d. 1153), was founder of Rievaulx Abbey, Yorkshire, and was probably the son of William Spech, who in 1085 held Warden, Bedfordshire, where some fifty years later Walter Espec founded and endowed an Abbey. "Espec's chief property was in Yorkshire, and he resided at Helmsley. Under Henry I he was Justice of the Forests and Itinerant Justice in the northern counties. Under Stephen he actively resisted the Scotch invasion. On 10 Jan. 1138 FitzDuncan failed in a night attack on Espec's castle of Wark. Then King David and his son Henry came up and formed a regular siege for three weeks, after which the main body passed on to Harry Northumberland. Three months later (c. 8 May) the garrison swooped down upon the Scotch king's commissariat, and had to submit to a second siege. The castle was stoutly defended by Walter's nephew, John de Bussey, but had to surrender about 11 Nov. " [2]

Early History of the Spick family

Spelling variations in names were a common occurrence in the eras before English spelling was standardized a few hundred years ago. In the Middle Ages, even the literate regularly changed the spellings of their names as the English language incorporated elements of French, Latin, and other European languages. Many variations of the name Spick have been found, including Speak, Speck, Speake, Speke and others.

Outstanding amongst the family at this time was Sir John Speke of Whitelackington; and Sir Hugh Speke, 1st Baronet of Hasilbury, Wiltshire (died 1661), an English politician who sat...
Another 28 words (2 lines of text) are included under the topic Early Spick Notables in all our PDF Extended History products and printed products wherever possible.

Spick migration to the United States +

For many English families, the social climate in England was oppressive and lacked opportunity for change. For such families, the shores of Ireland, Australia, and the New World beckoned. They left their homeland at great expense in ships that were overcrowded and full of disease. Many arrived after the long voyage sick, starving, and without a penny. But even those were greeted with greater opportunity than they could have experienced back home. Numerous English settlers who arrived in the United States and Canada at this time went on to make important contributions to the developing cultures of those countries. Many of those families went on to make significant contributions to the rapidly developing colonies in which they settled. Early North American records indicate many people bearing the name Spick were among those contributors:

Spick Settlers in United States in the 18th Century

Spick Settlers in New Zealand in the 19th Century