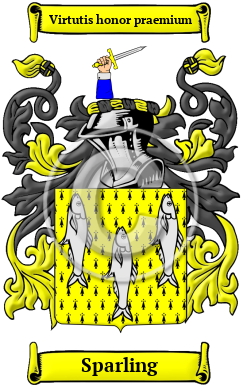 The surname Sparling is a ancient Anglo-Saxon name that is derived from the baptismal name for the son of Spirling, which was an ancient Old English personal name. After the Norman Conquest, the Old English naming system gradually dissolved. Old English names became less common and were replaced by popular continental European names. The earliest surnames in England were found shortly after the Norman Conquest and are of Norman French rather than native English origins.

Early Origins of the Sparling family

The surname Sparling was first found in Hertfordshire where they held a family seat from ancient times, some say long before the Norman Conquest in 1066 A.D.

Early History of the Sparling family

This web page shows only a small excerpt of our Sparling research. Another 84 words (6 lines of text) covering the years 1809 and 1834 are included under the topic Early Sparling History in all our PDF Extended History products and printed products wherever possible.

Spelling variations of this family name include: Sparling, Sparlin, Sperling, Spurling and others.

More information is included under the topic Early Sparling Notables in all our PDF Extended History products and printed products wherever possible.

In the United States, the name Sparling is the 12,133rd most popular surname with an estimated 2,487 people with that name. [1]

Migration of the Sparling family to Ireland

Some of the Sparling family moved to Ireland, but this topic is not covered in this excerpt.
Another 32 words (2 lines of text) about their life in Ireland is included in all our PDF Extended History products and printed products wherever possible.

Sparling migration to the United States +

Sparling Settlers in United States in the 17th Century

Sparling Settlers in United States in the 19th Century

Sparling Settlers in Australia in the 19th Century