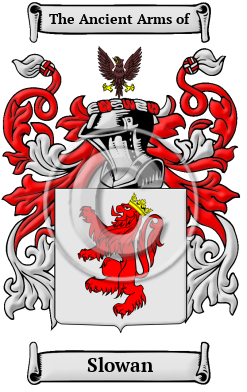 Early Origins of the Slowan family

The surname Slowan was first found in Kirkcudbrightshire (Gaelic: Siorrachd Chille Chuithbheirt), part of the present day Council Area of Dumfries and Galloway, former county in Southwestern Scotland, where they held a family seat. Johnn Slowane of Garoche was a juror on assize at Kirkcudbright in 1508.

Other early records include a William Slowane, who held a tenement near Dalkeith, in Midlothian in 1504.

The name has also existed in Ireland since at least the 15th Century, when bearers of Sloane emigrated to eastern Ulster, in Armagh and Down. However, there is some debate that the name also has native Irish roots, and had existed in Ireland prior to this emigration.

One source notes that the name is "from Irish O'Sluaghain, for O'Sluaghadain, 'descendant of SLaghadan,' probably a variant of O'Sluaghodhaigh, from the MIr. personal name Sluagadach, leader of a military expedition.' " [1]

Early History of the Slowan family

The origin of rules governing the spelling of names and even words is a very recent innovation. Before that, words and names were spelled according to sound, and, therefore, often appeared under several different spelling variations in a single document. Slowan has been spelled Sloan, Sloane, Slowan and others.

Another 40 words (3 lines of text) are included under the topic Early Slowan Notables in all our PDF Extended History products and printed products wherever possible.

Migration of the Slowan family to Ireland

Some of the Slowan family moved to Ireland, but this topic is not covered in this excerpt.
Another 111 words (8 lines of text) about their life in Ireland is included in all our PDF Extended History products and printed products wherever possible.

Migration of the Slowan family

The persecution faced in their homeland left many Scots with little to do but sail for the colonies of North America. There they found land, freedom, opportunity, and nations in the making. They fought for their freedom in the American War of Independence, or traveled north to Canada as United Empire Loyalists. In both cases, they made enormous contributions to the formation of those great nations. Among them: Ann Sloan who settled in Maryland in 1722; James Sloan settled in Charles Town [Charleston], South Carolina in 1772; Mrs. Sloan settled in Savannah, Georgia in 1823.