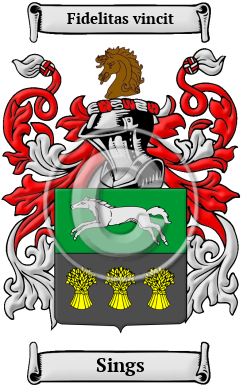 Sings is an Anglo-Saxon name. The name was originally given to a person who was a singaere or musician. During the Middle Ages people were identified by the type of work one did and were referred to in this manner. The traveling musician was therefore named the singaere, and was a well known and respected figure in medieval times. He was the main entertainer at fairs and festivals and was also a source of news and idle gossip from the neighboring towns.

Early Origins of the Sings family

The surname Sings was first found in Devon where one of the first records of the name was Lucas le Syngere who was listed in the Subsidy Rolls of 1296. The same rolls listed William le Syngur one year later in Yorkshire.

Early History of the Sings family

One relatively recent invention that did much to standardize English spelling was the printing press. However, before its invention even the most literate people recorded their names according to sound rather than spelling. The spelling variations under which the name Sings has appeared include Singer, Singers, Singar and others.

Notables of this surname at this time include: John Singer (fl. 1594-1602), an English actor and dramatist who was with Queen Elizabeth's company and the Admiral's (Lord Charles Howard...
Another 28 words (2 lines of text) are included under the topic Early Sings Notables in all our PDF Extended History products and printed products wherever possible.

Sings Settlers in Australia in the 19th Century