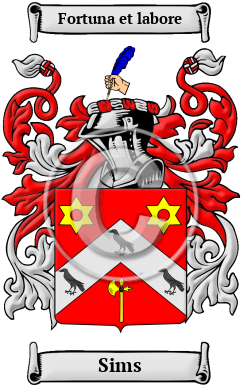 The name Sims is the product of a saga that began among the ancient Boernician tribes of Scotland. It is derived from the Medieval given name Sim which was derived from Simon, but denoted son of Simon. [1]

Early Origins of the Sims family

The surname Sims was first found in East Lothian, where the name is a diminutive of Symon and Simeon.

Early History of the Sims family

Spelling rules had not yet evolved in medieval Scotland, some names dating from that era often appear many different ways. Some spelling variations of Sims include Simms, Symes, Sime, Simes, Sim, Sym, Syms, Syme and others.

Notable amongst the family name during their early history was John Syme (1755-1831), nicknamed "Stamp-Office Johnny," a close friend of Robert Burns'. In the summers of 1793 and 1794, he joined Burns on his two short tours of Galloway. He and Alexander Cunningham were amongst the most active of the friends and admirers of Burns's works who raised funds for the poet's family. Together with Dr Willam Maxwell he arranged Burns's funeral. [3] Michael Symes (1753?-1809), was a British soldier and diplomatist, born about 1753, entered the army about 1787, and went to India in the following year with the newly raised...
Another 249 words (18 lines of text) are included under the topic Early Sims Notables in all our PDF Extended History products and printed products wherever possible.

Migration of the Sims family to Ireland

Some of the Sims family moved to Ireland, but this topic is not covered in this excerpt.
Another 77 words (6 lines of text) about their life in Ireland is included in all our PDF Extended History products and printed products wherever possible.

Sims migration to the United States +

The Boernician-Scottish people who came to North America were often nearly penniless when they arrived, and brought very few personal effects with them. Much Scottish heritage was lost in the process, and it is only this century that highland games, Clan societies, and other patriotic Scottish organizations have helped the ancestors of Scots to rediscover their national legacy. Simss were some of the first of the immigrants to arrive in North America:

Sims Settlers in United States in the 17th Century

Sims Settlers in United States in the 18th Century

Sims Settlers in United States in the 19th Century

Sims Settlers in Canada in the 18th Century

Sims Settlers in Australia in the 19th Century

Sims Settlers in New Zealand in the 19th Century

Sims Settlers in West Indies in the 17th Century

Historic Events for the Sims family +

Suggested Readings for the name Sims +