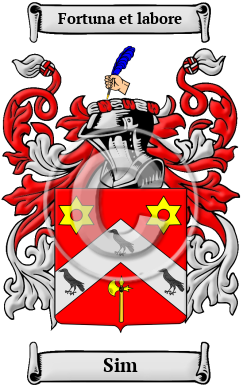 In the Scottish/English Borderlands of the medieval era, Sim was first used as a surname. It was derived from the Medieval given name Sim which was derived from Simon, but denoted son of Simon. [1]

Early Origins of the Sim family

The surname Sim was first found in East Lothian, where the name is a diminutive of Symon and Simeon.

Early History of the Sim family

Scribes in the Middle Ages simply spelled according to sound. The result is an enormous number of spelling variations among names that evolved in that era. Sim has been spelled Simms, Symes, Sime, Simes, Sim, Sym, Syms, Syme and others.

Notable amongst the family name during their early history was John Syme (1755-1831), nicknamed "Stamp-Office Johnny," a close friend of Robert Burns'. In the summers of 1793 and 1794, he joined Burns on his two short tours of Galloway. He and Alexander Cunningham were amongst the most active of the friends and admirers of Burns's works who raised funds for the poet's family. Together with Dr Willam Maxwell he arranged Burns's funeral. [3] Michael Symes (1753?-1809), was a British soldier and diplomatist, born about 1753, entered the army about 1787, and went to India in the following year with the newly raised...
Another 249 words (18 lines of text) are included under the topic Early Sim Notables in all our PDF Extended History products and printed products wherever possible.

Migration of the Sim family to Ireland

Some of the Sim family moved to Ireland, but this topic is not covered in this excerpt.
Another 77 words (6 lines of text) about their life in Ireland is included in all our PDF Extended History products and printed products wherever possible.

Sim migration to the United States +

Most of the Boernician-Scottish families who came to North America settled on the eastern seaboard of what would become the United States and Canada. Families who wanted a new order stayed south in the War of Independence, while those who were still loyal to the crown went north to Canada as United Empire Loyalists. In the 20th century, the ancestors of these families have gone on to rediscover their heritage through Clan societies and other patriotic Scottish organizations. Research into the origins of individual families in North America has revealed records of the immigration of a number of people bearing the name Sim or a variant listed above:

Sim Settlers in United States in the 17th Century

Sim Settlers in United States in the 18th Century

Sim Settlers in United States in the 19th Century

Sim Settlers in Canada in the 18th Century

Sim Settlers in Canada in the 19th Century

Sim Settlers in Australia in the 19th Century

Sim Settlers in New Zealand in the 19th Century

Historic Events for the Sim family +