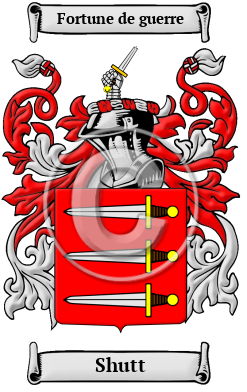 Early Origins of the Shutt family

The surname Shutt was first found in Wiltshire at Chute, a civil parish that includes the village of Upper Chute and the smaller settlements of Lower Chute, Chute Standen, Chute Cadley and Chute Forest.

Early History of the Shutt family

Distinguished members of the family include Philip Chute or Chowte (c. 1506-1567), of Horne Place, Appledore, Kent, an English politician, Member of Parliament for Winchelsea 1542 and 1545; Sir Robert Chute, Justice of the Queen's Bench, 1584; Anthony Chute (fl. 1590s; died 1595), an Elizabethan poet and pamphleteer; John Shute (d. 1563), an English artist and architect; Josias Shute (also Josiah) (1588-1643), an English churchman, rector of St Mary Woolnoth in London, Archdeacon of Colchester, and...
Another 76 words (5 lines of text) are included under the topic Early Shutt Notables in all our PDF Extended History products and printed products wherever possible.

In the United States, the name Shutt is the 6,678th most popular surname with an estimated 4,974 people with that name. [6]

Migration of the Shutt family to Ireland

Some of the Shutt family moved to Ireland, but this topic is not covered in this excerpt.
Another 43 words (3 lines of text) about their life in Ireland is included in all our PDF Extended History products and printed products wherever possible.

Shutt migration to the United States +

Shutt Settlers in United States in the 17th Century

Shutt Settlers in United States in the 18th Century

Shutt Settlers in United States in the 19th Century

Shutt Settlers in Australia in the 19th Century