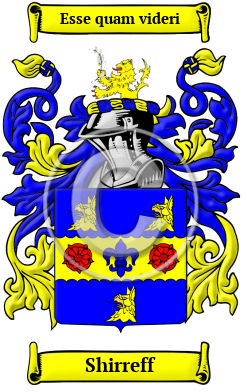 Shirreff is a name that was formed by the Anglo-Saxon society of old Britain. The name was thought to have been used for someone who once worked as a person who held the office of sheriff. This occupational surname was originally derived from the Old English words scir meaning shire and refa meaning reeve. The surname was originally derived from the "shire-reeve," a Vice Count who was in charge of the law for a shire or county. [1] Before the Norman Conquest the sheriff was the king's representative in a county, responsible for every aspect of local administration in England.

Early Origins of the Shirreff family

The surname Shirreff was first found in Warwickshire where they held a family seat from early times and their first records appeared on the early census rolls taken by the early Kings of Britain to determine the rate of taxation of their subjects.

Early History of the Shirreff family

This web page shows only a small excerpt of our Shirreff research. Another 77 words (6 lines of text) covering the years 156 and 1567 are included under the topic Early Shirreff History in all our PDF Extended History products and printed products wherever possible.

Until the dictionary, an invention of only the last few hundred years, the English language lacked any comprehensive system of spelling rules. Consequently, spelling variations in names are frequently found in early Anglo-Saxon and later Anglo-Norman documents. One person's name was often spelled several different ways over a lifetime. The recorded variations of Shirreff include Sheriff, Sherrif, Sherriff, Shirreffs, Sheriffs and many more.

More information is included under the topic Early Shirreff Notables in all our PDF Extended History products and printed products wherever possible.

Shirreff Settlers in Australia in the 19th Century