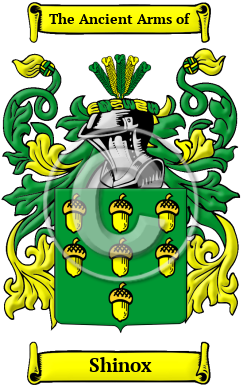 The ancestors of the name Shinox date back to the days of the Anglo-Saxon tribes of Britain. The name is derived from their residence in an area that was defined by seven oak trees. Shinox is a topographic surname, which was given to a person who resided near a physical feature such as a hill, stream, church, or type of tree. During the Middle Ages, as society became more complex, individuals needed a way to be distinguishable from others. Toponymic surnames were developed as a result of this need. Various features in the landscape or area were used to distinguish people from one another. In this case the original bearers of the surname Shinox were named due to their close proximity to the seven oakes.

Early Origins of the Shinox family

The surname Shinox was first found in Kent where they held a family seat at Seven-oaks, a market-town and parish, and the head of a union, in the hundred of Codsheath.

"This place, which in the Textus Roffensis is written Seovan Acca, is supposed to have derived its name from seven large oaks that stood upon the eminence on which the town is built. The free grammar school was founded and endowed in 1432, by Sir William Sevenoake, (1378?-1433?), usually written Sennocke, who, being deserted by his parents, was brought up by some charitable persons, and apprenticed to a grocer in London, from which station he rose to be lord mayor of that city, and its representative in parliament, leaving a portion of his wealth to found this school and an hospital for decayed elderly tradespeople. " [1]

The variant Sinnock was "a corruption of Sevenoaks. " [2]

Early History of the Shinox family

Shinox has been spelled many different ways. Before English spelling became standardized over the last few hundred years, spelling variations in names were a common occurrence. As the English language changed in the Middle Ages, absorbing pieces of Latin and French, as well as other languages, the spelling of people's names also changed considerably, even over a single lifetime. Many variations of the name Shinox have been found, including Snook, Snooks, Snukes, Sevenoak, Sevenoaks, Sevenoke, Sevenokes, Sinnox, Sinnocks, Sennocke, Sennox, Sevenocke, Sevenockes, Snooke, Snouk, Snouks, Sinnicks, Shinnicks, Shinnocks, Chennix and many more.

Another 29 words (2 lines of text) are included under the topic Early Shinox Notables in all our PDF Extended History products and printed products wherever possible.

Migration of the Shinox family to Ireland

Some of the Shinox family moved to Ireland, but this topic is not covered in this excerpt.
Another 102 words (7 lines of text) about their life in Ireland is included in all our PDF Extended History products and printed products wherever possible.

Migration of the Shinox family

In an attempt to escape the chaos experienced in England, many English families boarded overcrowded and diseased ships sailing for the shores of North America and other British colonies. Those families hardy enough, and lucky enough, to make the passage intact were rewarded with land and a social environment less prone to religious and political persecution. Many of these families became important contributors to the young colonies in which they settled. Early immigration and passenger lists have documented some of the first Shinoxs to arrive on North American shores: George Snouks who settled in Barbados in 1680 with his servants; James Snooke settled in Boston Massachusetts in 1630; David Snook, his wife and son Joe settled in Georgia in 1733.