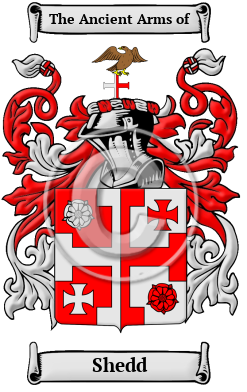 The surname Shedd is of Anglo-Saxon origin. It is derived from the Old English word "scydd," meaning "hovel, shed," and thus refers to a "dweller at the hovel."

Early Origins of the Shedd family

The surname Shedd was first found in Yorkshire where bearers of the name have lived since early times. During the years after the Conquest, England was dominated by the Normans, and the presence of Anglo-Saxon surnames was dwarfed by the sudden influx of French. Many of these surnames survived, however, and the written history of the Shedd family dates back to this ancient period.

Early History of the Shedd family

This web page shows only a small excerpt of our Shedd research. Another 118 words (8 lines of text) covering the years 1301, 1327, 1524, 1642 and 1773 are included under the topic Early Shedd History in all our PDF Extended History products and printed products wherever possible.

Spelling variations of this family name include: Shedd, Shed, Shede, Shead, Sched and others.

More information is included under the topic Early Shedd Notables in all our PDF Extended History products and printed products wherever possible.

In the United States, the name Shedd is the 7,454th most popular surname with an estimated 4,974 people with that name. [1]

Migration of the Shedd family to Ireland

Some of the Shedd family moved to Ireland, but this topic is not covered in this excerpt.
Another 59 words (4 lines of text) about their life in Ireland is included in all our PDF Extended History products and printed products wherever possible.

Migration of the Shedd family

Some of the first settlers of this family name or some of its variants were: Daniel Shed, who settled in Massachusetts in 1643; James Shed, who immigrated to Virginia in 1740; Thomas Shed, who took an oath of allegiance in Pennsylvania in 1777.