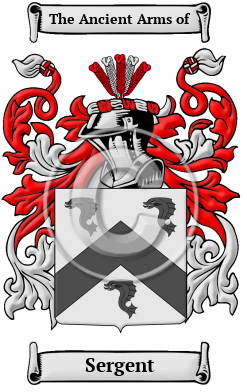 The name Sergent is rooted in the ancient Anglo-Saxon culture. It was originally a name for someone who worked as a person who held the official name of Sergeant or Serjant. This occupational surname referred to the individual who was an officer of the law, someone who could summon people to court. The name could also refer to the officer who was a tenant by military service under the rank of a knight.

Early Origins of the Sergent family

Some of the family were found in early years in the parish of Endellion, Cornwall. "The manor of Trefrike or Trefreke, belonged at a very early period to the family of Serjeaux; since, so early as 1396 it passed with a co-heiress to the Marneys, and was afterwards in the family of Passelew, the descendants from another co-heiress of Serjeaux." [2]

"The manor of Helland, which belonged at a very early period to the family of Sergeaux, passed from them by a co-heiress to Sir John Passele, who possessed it in the year 1427." [2]

"The manor of Lanreath, Lanreth, or Lanretho, [in Cornwall] from which the name probably was made to extend to the whole district, belonged in the middle of the thirteenth century to the family of Serjeaux, by one of whose co-heiresses it was carried in marriage to the Pashleys." [2]

Early History of the Sergent family

This web page shows only a small excerpt of our Sergent research. Another 75 words (5 lines of text) covering the years 1622, 1707, 1714, 1674, 1692, 1703 and are included under the topic Early Sergent History in all our PDF Extended History products and printed products wherever possible.

It is only in the last few hundred years that the English language has been standardized. For that reason, early Anglo-Saxon surnames like Sergent are characterized by many spelling variations. As the English language changed and incorporated elements of other European languages, even literate people changed the spelling of their names. The variations of the name Sergent include Sargent, Sargant, Sargaunt, Sarguent, Sarjeant, Sargeant, Sergeant and many more.

Another 45 words (3 lines of text) are included under the topic Early Sergent Notables in all our PDF Extended History products and printed products wherever possible.

Migration of the Sergent family to Ireland

Some of the Sergent family moved to Ireland, but this topic is not covered in this excerpt.
Another 57 words (4 lines of text) about their life in Ireland is included in all our PDF Extended History products and printed products wherever possible.

Sergent migration to the United States +

Many English families tired of political and religious strife left Britain for the new colonies in North America. Although the trip itself offered no relief - conditions on the ships were extremely cramped, and many travelers arrived diseased, starving, and destitute - these immigrants believed the opportunities that awaited them were worth the risks. Once in the colonies, many of the families did indeed prosper and, in turn, made significant contributions to the culture and economies of the growing colonies. An inquiry into the early roots of North American families has revealed a number of immigrants bearing the name Sergent or a variant listed above:

Sergent Settlers in United States in the 17th Century

Sergent Settlers in United States in the 19th Century

Sergent Settlers in United States in the 20th Century

Sergent Settlers in New Zealand in the 19th Century