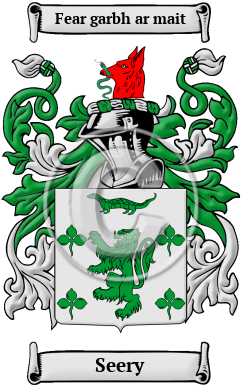 The name Seery has changed considerably in the time that has passed since its genesis. It originally appeared in Gaelic as Mag Fhearadhaigh, derived from the word "fearadhach," possibly meaning "manly." [1]

Early Origins of the Seery family

The surname Seery was first found in Connacht (Irish: Connachta, (land of the) descendants of Conn), where they held a family seat from ancient times. [2]

Over in Devon, England, "The ' Domesday ' manor of Kari, in the parish of St. Giles-in-the-Heath, was the first recorded seat of the Gary family ; and one branch continued to reside there so late as the reign of Elizabeth. As early, however, as the reign of Richard II. it ceased to be their principal home. Sir William Gary then settled at Clovelly, and his brother Sir John, Chief Baron of the Exchequer, acquired, with many other manors, that of Cockington, only to lose them all by deciding for Richard against the Commissioners. His attainder was reversed in favour of his son Robert, who gained the favour of Henry V. by vanquishing an Aragonese knight in Smithfield. Two generations later the family were again in difficulty. Sir William Gary, grandson of Robert, was an ardent Lancastrian ; and one of those who, after the fatal battle of Tewkesbury, took refuge in the Abbey Church. Two days later the refugees were treacherously beheaded. The usual forfeiture followed; but Sir William's eldest son, Robert, obtained restoration from Henry VII. He was the ancestor of the present stock of Devonshire Carys. From his half-brother spring the ennobled Carys, represented by Lord Falkland." [3]

Early History of the Seery family

This web page shows only a small excerpt of our Seery research. Another 79 words (6 lines of text) covering the years 1585, 1667 and 1668 are included under the topic Early Seery History in all our PDF Extended History products and printed products wherever possible.

Numerous spelling variations of the surname Seery exist. A partial explanation for these variants is that ancient scribes and church officials recorded names as they were pronounced, often resulting in a single person being recorded under several different spellings. Different spellings that were found include Garry, Garrihy, Hare, O'Hare, O'Heihir, MacGarry and many more.

Another 32 words (2 lines of text) are included under the topic Early Seery Notables in all our PDF Extended History products and printed products wherever possible.

In the United States, the name Seery is the 15,354th most popular surname with an estimated 2,487 people with that name. [4]

Seery migration to the United States +

The 19th century saw a great wave of Irish migrating out of their homeland in a great measure due to the oppressive imperial policies of the English government and landowners. Many of these Irish families sailed to North America aboard overcrowded passenger ships. By far, the largest influx of Irish immigrants to North America occurred with Great Potato Famine during the late 1840s. These particular immigrants were instrumental in creation of the United States and Canada as major industrial nations because the many essential elements such as the roadways, canals, bridges, and railways required an enormous quantity of cheap labor, which these poor immigrants provided. Later generations of Irish in these countries also went on to make valuable contributions in such fields as the arts, commerce, politics, and education. Extensive research into immigration and passenger lists has revealed many early immigrants bearing the name Seery:

Seery Settlers in United States in the 19th Century

Seery Settlers in United States in the 20th Century

Seery Settlers in Canada in the 19th Century