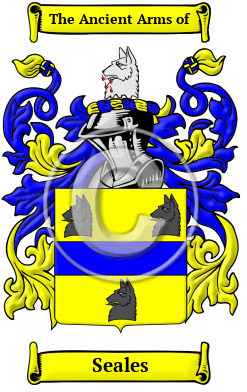 The Seales history begins in Cornwall, a rugged coastal region in southwestern England. Quite distinct from Devon, the adjoining county, Cornwall had its own spoken language until the late 18th century. The Seales history began here. The manner in which hereditary surnames arose is interesting. Local surnames were derived from where the original bearer lived, was born, or held land. Unlike most Celtic peoples, who favored patronymic names, the Cornish predominantly used local surnames. The Seales family originally lived in the parish of Seal which had various locations in England including the counties of Northumberland, Leicester, Surrey and Kent.

Early Origins of the Seales family

Today Seales could also be a Bengali Hindu Brahmin family name which literally means "the quality of being devoted."

Early History of the Seales family

This web page shows only a small excerpt of our Seales research. Another 67 words (5 lines of text) are included under the topic Early Seales History in all our PDF Extended History products and printed products wherever possible.

More information is included under the topic Early Seales Notables in all our PDF Extended History products and printed products wherever possible.

In the United States, the name Seales is the 11,957th most popular surname with an estimated 2,487 people with that name. [4]

Migration of the Seales family to Ireland

Some of the Seales family moved to Ireland, but this topic is not covered in this excerpt. More information about their life in Ireland is included in all our PDF Extended History products and printed products wherever possible.

Seales migration to the United States +

Seales Settlers in United States in the 17th Century

Seales Settlers in New Zealand in the 19th Century