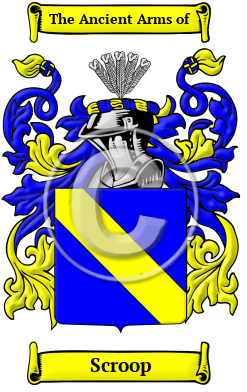 Early Origins of the Scroop family

The surname Scroop was first found in Yorkshire where "few families were more important in the 14th and 15th centuries than the noble house of Scrope; their descent is unbroken from the Conquest. Few houses also have been more distinguished by the number of great offices of honour held both in Church and State." [1] The first record in Yorkshire was found in "Bolton, being from the period of Edward I., their principal seat and Barony." [1]

The surname's origin can be traced to "one of King Edward the Confessor's foreign attendants named Richard, to whom the Anglo-Saxons gave the derisory name of Sceope, or 'the Scrub' either on account of some inferior office or perhaps as a merely satirical appellation, and who was one of the few Normans permitted to remain at court after the rest had been driven away." [2]

Masham in the North Riding of Yorkshire "was anciently the residence of the baronial family of Scroop, of whom Henry, Lord le Scroop, lord treasurer, and Archbishop Scroop, were both beheaded for high treason in the reign of Henry IV." [3]

Early History of the Scroop family

Spelling variations of this family name include: Scrope, Scroope, Scroop, Scope and others.

Notables of the family at this time include Richard le Scrope, 1st Baron Scrope of Bolton (c. 1327-1403), English soldier and courtier, serving Richard II of England, fought under the Black Prince at the Battle of Crecy (1346), a knight of the shire for Yorkshire in the parliament of 1364, summoned to the upper house as a Baron by writ (1371), became Lord High Treasurer and Keeper of the Great Seal, became Lord Chancellor (1378), resinged in 1380 when governemtn collapsed, after his successor was beheaded, took up...
Another 88 words (6 lines of text) are included under the topic Early Scroop Notables in all our PDF Extended History products and printed products wherever possible.

Migration of the Scroop family

Some of the first settlers of this family name or some of its variants were: Thomas Scrope who settled in Virginia in 1651.