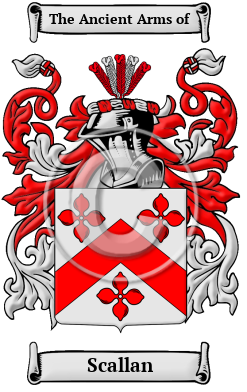 Early Origins of the Scallan family

The surname Scallan was first found in Wexford (Irish: Loch Garman), founded by Vikings as Waesfjord, and located in Southeastern Ireland, in the province of Leinster, where they held a family seat as a branch of Madigan clann. Traditionally they are descended from Fiacha Araidhe the 37th King of Ulster. More directly, they are descended from Scoieach, a chieftain and schoolteacher of the Madigan line and related to the Mannings. Irish history was greatly influenced by the Norman invasion of 1172, and thereafter, the surnames of Irish Gaelic clanns and septs and many of the Norman families became almost indistinguishable. This family name was found later in County Meath and represented the first recorded reference to the name.

Early History of the Scallan family

This web page shows only a small excerpt of our Scallan research. Another 71 words (5 lines of text) are included under the topic Early Scallan History in all our PDF Extended History products and printed products wherever possible.

More information is included under the topic Early Scallan Notables in all our PDF Extended History products and printed products wherever possible.

Scallan migration to the United States +

Scallan Settlers in United States in the 19th Century

Scallan Settlers in Canada in the 19th Century