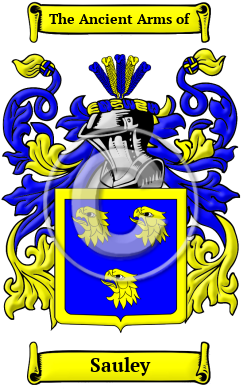 Early Origins of the Sauley family

The surname Sauley was first found in Cornwall where they held a family seat as Lords of the Manor of Penrice.

"The manor of Penrice has for many generations belonged to the ancient family of Sawle. The founder of this family came from Normandy with William the Conqueror. He was probably placed in these parts after the Conquest, under the Earl of Moreton, to command those troops which were kept on foot to awe the people into submission to the Norman authority. For it appears, that prior to any records which are now extant, some branches of this family had taken up their residence at Towan, in this parish, and also in some parts of Devonshire; in both of which counties this name has long been known, and as long associated with wealth and power. At what particular time the Sawle family first became inhabitants of Penrice, their present seat, it is difficult to ascertain. It is certain that this has been the place of their abode for many generations." [1]

Mention is made of the family at St. Austell Church in the parish of St. Austell.

"There are some marbles erected to the ancient family of Sawle, particularly one to the memory of John Sawle, Esq. who died in 1715, and Trevanion Sawle, his son, who died in 1714; this is the most elegant one in the church. There is also another that is less superb, erected to the memory of John Sawle, Esq. the last male heir of that ancient family, who died in 1789. This was erected by his maiden sister, Mrs. Mary Sawle, the last survivor who retained the name." [1]

Early History of the Sauley family

Cornish surnames are characterized by a multitude of spelling variations. The frequent changes in surnames are due to the fact that the Old and Middle English languages lacked definite spelling rules. The official court languages, which were Latin and French, were also influential on the spelling of a surname. Since the spelling of surnames was rarely consistent in medieval times, and scribes and church officials recorded names as they sounded rather than adhering to any specific spelling rules, it was common to find the same individual referred to with different spellings of their surname in the ancient chronicles. Moreover, a large number of foreign names were brought into England, which accelerated and accentuated the alterations to the spelling of various surnames. Lastly, spelling variations often resulted from the linguistic differences between the people of Cornwall and the rest of England. The Cornish spoke a unique Brythonic Celtic language which was first recorded in written documents during the 10th century. However, they became increasingly Anglicized, and Cornish became extinct as a spoken language in 1777, although it has been revived by Cornish patriots in the modern era. The name has been spelled Sawle, Sawley, Saule, Sauley, Sawlly, Sawlley, Sawlle, Saully and many more.

Another 30 words (2 lines of text) are included under the topic Early Sauley Notables in all our PDF Extended History products and printed products wherever possible.

Migration of the Sauley family

In the immigration and passenger lists a number of early immigrants bearing the name Sauley were found: the name represented in many forms and recorded from the mid 17th century in the great migration from Europe. Migrants settled in the eastern seaboard from Newfoundland, to Maine, to Virginia, the Carolinas, and to the islands..