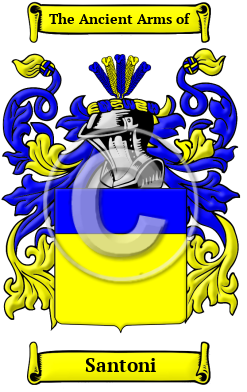 Early Origins of the Santoni family

The surname Santoni was first found in Selkirk, where they held a family seat in their territories. The Norman influence on Scottish history considerably influenced the crown and government in the period between King Malcolm Canmore (1058-1093) and King David (1124-1153). Many Norman nobles were either invited or escaped into Scotland following the example of Margeret, wife of Malcolm Canmore, who actively recruited these Normans to their court. Originally from the Castle ward at Roxburgh, they were granted lands at Ashkirk, Selkirk by King William of Scotland about 1180.

Early History of the Santoni family

This web page shows only a small excerpt of our Santoni research. Another 203 words (14 lines of text) covering the years 1296, 1st , 1745, 1510, 1600, 1550 and 103b are included under the topic Early Santoni History in all our PDF Extended History products and printed products wherever possible.

Spelling variations of this family name include: Sinton, Synton, Syntone, Syntune, Sintone, Sancton and many more.

More information is included under the topic Early Santoni Notables in all our PDF Extended History products and printed products wherever possible.

In France, the name Santoni is the 2,020th most popular surname with an estimated 3,095 people with that name. [1]

Migration of the Santoni family to Ireland

Some of the Santoni family moved to Ireland, but this topic is not covered in this excerpt.
Another 111 words (8 lines of text) about their life in Ireland is included in all our PDF Extended History products and printed products wherever possible.

Santoni migration to the United States +

Santoni Settlers in United States in the 20th Century