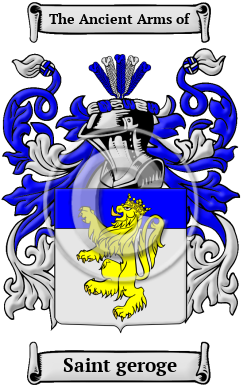 The surname Saint geroge was first found in St. Goerge, near St. Lo, in the Cotentin, Normandy. Some of the first records of the family include: Helias de St. George who occurs in Sussex in the time of Henry I. and Baldwin de St. George, at about the same date, who witnesses a charter of William Peverel of Dover. [1]

"The descendants of Baldwin St. George, the Norman, flourished in England for several centuries, and frequently represented the County of Cambridge in parliament. They were seated at Hartley St George, in that shire, full 500 years." [2]

"This place was for a long period in the possession of the St. Georges, who had their chief seat and a park here, and held the estate so early as the reign of Henry III. " [3]

Most of the family claim descent from the aforementioned Baldwin de St. George or Baldwin St. George, knight of the shire for Cambridge in 1381 who married the heiress or co-heiress of John d'Engayne, who brought him several manors in the county. Sir Richard Saint George, Clarencieux King of Arms was the first herald in this family of heralds,* and stated to be eighteenth in descent from the first Baldwin de St. George. He "had two younger sons who both settled in Ireland. One of them, Sir George, was grandfather to another Sir George, created Lord St. George in the peerage of Ireland in 1715. His title expired with him, but in 1763 was revived in favour of St. George Usher, who was the son of his only child, Mrs. Usher. The other brother Richard had a numerous posterity. From him descend the St. Georges of Parsonstown, the St. Georges of Wood Park, co. Armagh, the St. Georges of Woodside, Cheshire, the St.Georges of Camma Lodge in Roscommon, and the St. Georges of Woodsgift, who received a baronetcy in 1766." [1]

Richard St. George who went to Ireland in the beginning of the 17th century in the Royal Army was appointed governor of Castle Athlone. [2]

Spelling variations of this family name include: St.George, St George, Saint Geroge and others.

Outstanding amongst the family at this time was Sir Richard St George (c1550-1635), of Wiltshire, an English officer of arms at the College of Arms; and his son, Henry St George (1581-1644), an English Officer of Arms, Garter...
Another 38 words (3 lines of text) are included under the topic Early Saint geroge Notables in all our PDF Extended History products and printed products wherever possible.

Migration of the Saint geroge family to Ireland

Some of the Saint geroge family moved to Ireland, but this topic is not covered in this excerpt.
Another 122 words (9 lines of text) about their life in Ireland is included in all our PDF Extended History products and printed products wherever possible.

Migration of the Saint geroge family