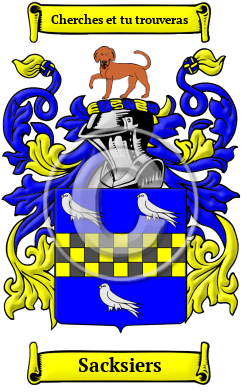 The name Sacksiers is rooted in the ancient Anglo-Saxon culture. It was originally a name for someone who worked as a person who worked as the sawyer. [1] [2] This individual bought wood and cut it with his saw in order to sell it the towns people. Occupational names frequently were derived from the principal object associated with the activity of the original bearer, such as tools or products. These types of occupational surnames are called metonymic surnames.

Early Origins of the Sacksiers family

The surname Sacksiers was first found in various counties and shires throughout ancient Britain. The earliest record of the family was found in Berkshire where Nicholas le Sagyere was listed c. 1248. A few years later, Humfrey le Sayhare, le Sawyere, and Robert le Sawyere, le Saweare were both listed in the Assize Rolls of Somerset in 1270. [4]

Early History of the Sacksiers family

This web page shows only a small excerpt of our Sacksiers research. Another 81 words (6 lines of text) covering the years 1633, 1692, 1681, 1687, 1783, 1833 and 1812 are included under the topic Early Sacksiers History in all our PDF Extended History products and printed products wherever possible.

It is only in the last few hundred years that the English language has been standardized. For that reason, early Anglo-Saxon surnames like Sacksiers are characterized by many spelling variations. As the English language changed and incorporated elements of other European languages, even literate people changed the spelling of their names. The variations of the name Sacksiers include Sawyer, Sawier, Sawer and others.

Notables of the family at this time include Sir Robert Sawyer, of Highclere (1633-1692), Attorney General for England and Wales (1681-1687) and Speaker of the English House of Commons; and Admiral Sir...
Another 31 words (2 lines of text) are included under the topic Early Sacksiers Notables in all our PDF Extended History products and printed products wherever possible.

Migration of the Sacksiers family

Many English families tired of political and religious strife left Britain for the new colonies in North America. Although the trip itself offered no relief - conditions on the ships were extremely cramped, and many travelers arrived diseased, starving, and destitute - these immigrants believed the opportunities that awaited them were worth the risks. Once in the colonies, many of the families did indeed prosper and, in turn, made significant contributions to the culture and economies of the growing colonies. An inquiry into the early roots of North American families has revealed a number of immigrants bearing the name Sacksiers or a variant listed above: Francis Sawyer settled in Virginia in 1635; following John in 1622; Lydia in 1655; Mary in 1649; Nicholas in 1652; Thomas in 1650; William in 1623; and they also settled in Massachusetts, Barbados, Portland, San Francisco and Philadelphia. Thomas Sawier settled in Virginia in 1620.