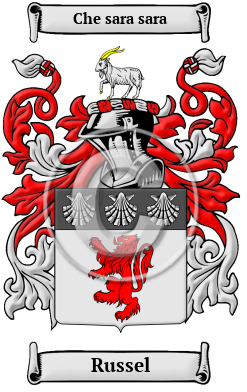 Russel is one of the many new names that came to England following the Norman Conquest of 1066. The Russel family lived in Dorset. Their name, however, is a reference to Roussel, Normandy, the family's place of residence prior to the Norman Conquest of England in 1066. The family there were lords of Rosel, an ancient neighborhood of Cherbourg. [1] [2]

Early Origins of the Russel family

The surname Russel was first found in Dorset where they were originally descended from William Bertram, Baron of Briquebec, living in 1012. His son Hugue (Hugh) named de Roussel attended Duke William at Hastings, and became Marshall of England. "Hugh de Rosel, a benefactor of the abbey of Caen accompanied the Conqueror to England, and was rewarded with possessions in county Dorset, the principally of which were Kingston, afterwards called Kingston-Russell and Berwick, the latter of which is still in possession of the family." [1]

The noted Scottish author George F. Black believed that while not discounting the Norman influence, he felt the name was "most probably a diminutive of rous, 'red'," and that Chaucer's reference to 'Daun Russel' in Nonne Prestes Tale was "alluding to his reddish color." [3] He also notes one the first records in Scotland was Walter Russell who witnessed a charter by Walter filius Alani to the Abbey of Paisley, c. 1164-77. A few years later, John, son of Robert Russel of Doncallaw, granted lands to the Hospital of Soltre between 1180 and 1220. [3]

Moving back to the English branch of the family, we found a few listed in the Hundredorum Rolls of 1273, specifically: Miriel Russell in Huntingdonshire; Simon Russel in Cambridgeshire; and Elyas Russell in London. The Yorkshire Poll Tax Rolls of 1379 listed: Johannes Russell and Robertus Russell. [4]

Over on the Isle of Wight in Yaverland, a small branch of the family was found at one time. "An ancient mansion of the Russells here, subsequently of the Richards family, and now a farmhouse, is a good specimen of the Elizabethan style." [5]

"The Russells have ever been the most liberal of landlords. Every improvement made in Tavistock, [Devon] has been carried out by the Duke for the time being, ' regardless of expense,' with a taste as well as a liberality that have resulted in making the little town so far as its main thoroughfares go the handsomest of its size in the West of England. " [6]

Early History of the Russel family

Anglo-Norman names are characterized by a multitude of spelling variations. When the Normans became the ruling people of England in the 11th century, they introduced a new language into a society where the main languages of Old and later Middle English had no definite spelling rules. These languages were more often spoken than written, so they blended freely with one another. Contributing to this mixing of tongues was the fact that medieval scribes spelled words according to sound, ensuring that a person's name would appear differently in nearly every document in which it was recorded. The name has been spelled Russell, Russel and others.

In the United States, the name Russel is the 5,804th most popular surname with an estimated 4,974 people with that name. [7]

Migration of the Russel family to Ireland

Some of the Russel family moved to Ireland, but this topic is not covered in this excerpt.
Another 111 words (8 lines of text) about their life in Ireland is included in all our PDF Extended History products and printed products wherever possible.

Russel migration to the United States +

For many English families, the political and religious disarray that plagued their homeland made the frontiers of the New World an attractive prospect. Thousands migrated, aboard cramped disease-ridden ships. They arrived sick, poor, and hungry, but were welcomed in many cases with far greater opportunity than at home in England. Many of these hardy settlers went on to make important contributions to the emerging nations in which they landed. Among early immigrants bearing the name Russel or a variant listed above were:

Russel Settlers in United States in the 17th Century

Russel Settlers in United States in the 18th Century

Russel Settlers in United States in the 19th Century

Russel Settlers in Canada in the 18th Century

Russel Settlers in Australia in the 19th Century

Russel Settlers in New Zealand in the 19th Century

Historic Events for the Russel family +

Motto: Che sara sara
Motto Translation: What will be will be.