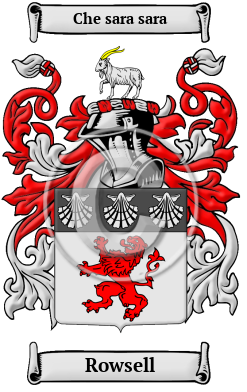 Early Origins of the Rowsell family

The surname Rowsell was first found in Dorset where they held a family seat from very early times and were granted lands by Duke William of Normandy, their liege Lord, for their distinguished assistance at the Battle of Hastings in 1066 A.D.

Early History of the Rowsell family

This web page shows only a small excerpt of our Rowsell research. Another 112 words (8 lines of text) covering the years 1012, 1486, 1550, 1555, 1613, and 1700 are included under the topic Early Rowsell History in all our PDF Extended History products and printed products wherever possible.

A multitude of spelling variations characterize Norman surnames. Many variations occurred because Old and Middle English lacked any definite spelling rules. The introduction of Norman French to England also had a pronounced effect, as did the court languages of Latin and French. Therefore, one person was often referred to by several different spellings in a single lifetime. The various spellings include Rowsell, Rowsel, Russell and others.

Outstanding amongst the family at this time was Sir John Russell, (c.1486-1555), lord high steward and lord keeper of the privy seal under Henry VIII and Edward VI, created 1st...
Another 30 words (2 lines of text) are included under the topic Early Rowsell Notables in all our PDF Extended History products and printed products wherever possible.

In Newfoundland, Canada, the name Rowsell is the 113rd most popular surname with an estimated 307 people with that name. [1]

Migration of the Rowsell family to Ireland

Some of the Rowsell family moved to Ireland, but this topic is not covered in this excerpt. More information about their life in Ireland is included in all our PDF Extended History products and printed products wherever possible.

Rowsell Settlers in Australia in the 19th Century

Historic Events for the Rowsell family +

Motto: Che sara sara
Motto Translation: What will be will be.