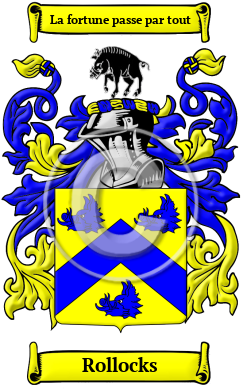 Early Origins of the Rollocks family

The surname Rollocks was first found in Perthshire (Gaelic: Siorrachd Pheairt) former county in the present day Council Area of Perth and Kinross, located in central Scotland. Rollo (c. 846-c. 932), baptised Robert, was a Viking who became the first ruler of Normandy, a region of France.

Early History of the Rollocks family

Spelling variations of this family name include: Rollo, Rollock and others.

Migration of the Rollocks family

Some of the first settlers of this family name or some of its variants were: Donald Rollo arrived in New York State in 1820.

Motto: La fortune passe par tout
Motto Translation: The vicissitudes of fortune are common to all.