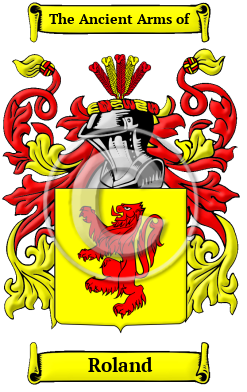 Early Origins of the Roland family

The surname Roland was first found in Ayrshire (Gaelic: Siorrachd Inbhir Àir), formerly a county in the southwestern Strathclyde region of Scotland, that today makes up the Council Areas of South, East, and North Ayrshire, where they held a family seat from early times and their first records appeared on the early census rolls taken by the early Kings of Scotland to determine the rate of taxation of their subjects.

Richard Rollison is the fictional wealthy bachelor living in a Mayfair flat at 22 Gresham Terrace, nicknamed the Toff, by John Creasey (1908-1973) in his 60 Toff adevntures.

Early History of the Roland family

This web page shows only a small excerpt of our Roland research. Another 139 words (10 lines of text) covering the years 1184, 1196, 1296, 1555 and are included under the topic Early Roland History in all our PDF Extended History products and printed products wherever possible.

Spelling variations of this family name include: Rolland, Roland, Rowland, Rowlands, Rowlandson, Rolan and many more.

Another 39 words (3 lines of text) are included under the topic Early Roland Notables in all our PDF Extended History products and printed products wherever possible.

Migration of the Roland family to Ireland

Some of the Roland family moved to Ireland, but this topic is not covered in this excerpt.
Another 66 words (5 lines of text) about their life in Ireland is included in all our PDF Extended History products and printed products wherever possible.

Roland migration to the United States +

Roland Settlers in United States in the 17th Century

Roland Settlers in United States in the 18th Century

Roland Settlers in United States in the 19th Century

Roland Settlers in Canada in the 18th Century

Roland Settlers in Australia in the 19th Century

Roland Settlers in New Zealand in the 19th Century

Historic Events for the Roland family +

Suggested Readings for the name Roland +