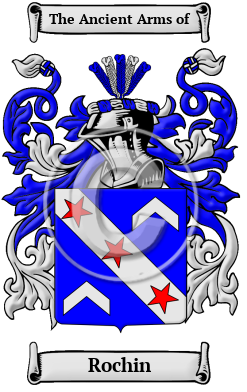 Early Origins of the Rochin family

The surname Rochin was first found in Limousin where this eminent family held a family seat in the honour of the seigneurie of Lapeyrouse.

Jean de La Rochelle, John of Rupella, and Johannes de Rupella (c. 1200-1245), was a French Franciscan and theologian. Born in La Rochelle, a seaport on the Bay of Biscay, France, he was a pupil of Alexander of Hales and was the first Franciscan to receive a bachelor's degree of theology from the University of Paris.

An important branch of this family moved to Maine and provided many of the migrants to North America. Notable amongst this family was Alexis-Marie Rochon, an astronomer, explorer, and member of the Academy of Sciences in 1771, who died in 1817, of note was his "Voyage à Madasgar". Chavannes de Rochon, dramatic author in 1730 to 1800, who wrote the opera "Les Pretendus" in 1789.

Early History of the Rochin family

This web page shows only a small excerpt of our Rochin research. More information is included under the topic Early Rochin History in all our PDF Extended History products and printed products wherever possible.

More information is included under the topic Early Rochin Notables in all our PDF Extended History products and printed products wherever possible.

Migration of the Rochin family