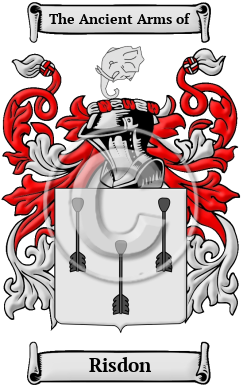 Early Origins of the Risdon family

The surname Risdon was first found in Kent where the first on record was Simon de Risedene who was listed there in the Pipe Rolls of 1198. The name is generally thought to have originated in Riseden in Goudhurst or at Risden in Hawkhurst. [1]

From this early listing, we must move to Bableigh, Parkham in North Devon. For it here that "Risdon was the name of an old gentle family of in the 16th and 17th centuries." [2]

"Of the Risdons of Bableigh, in Parkham parish, I can glean but few particulars. The Rev. Edward Risdon was very instrumental in the foundation of Douay College in 1568." [3]

Early History of the Risdon family

Distinguished members of the family include Tristram Risdon (c. 1580-1640), an English antiquarian and topographer, author of "Survey of the County of Devon." He was born at Winscot St. Giles, near Torrington, Devon, and was the eldest...
Another 36 words (3 lines of text) are included under the topic Early Risdon Notables in all our PDF Extended History products and printed products wherever possible.

Risdon migration to the United States +

Risdon Settlers in United States in the 19th Century

Risdon Settlers in United States in the 20th Century

Risdon Settlers in Canada in the 20th Century

Risdon Settlers in New Zealand in the 19th Century