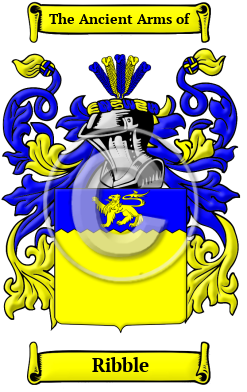 Early Origins of the Ribble family

In the next century, Richard Ribald was found in Somerset in 1230 and in the following century, John Ribald was registered in the Assize Rolls for Lincolnshire in 1373. [2]

One source notes that name could literally mean "dweller by the River Ribble. We do not know what the Celtic name of the Ribble was. The earliest recorded uncompounded form of the name is the Domesday Ripa ('Inter Ripam et Mersham') which is apparently intended for the Latin ripa, a river-bank. 'Ribble' may, in fact, represent Latin rivell-us, a diminutive f: riv-us, a stream, brook" [3]

Again in Norfolk, other early entries include: Ribald de Middleham, Norfolk, temp. 1200 in the Feet of Fines and Ribaldus (without surname), Norfolk in the Hundredorum Rolls of 1273. [4]

Early History of the Ribble family

This web page shows only a small excerpt of our Ribble research. Another 118 words (8 lines of text) covering the years 1200 and 1273 are included under the topic Early Ribble History in all our PDF Extended History products and printed products wherever possible.

More information is included under the topic Early Ribble Notables in all our PDF Extended History products and printed products wherever possible.

Ribble migration to the United States +

Ribble Settlers in United States in the 18th Century