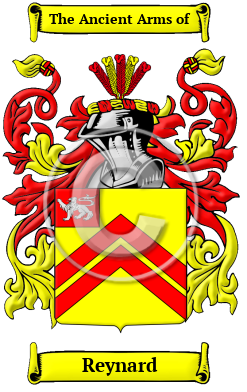 The name Reynard has a rich and ancient history. It is an Anglo-Saxon name that was originally derived from the baptismal name Rainer, which was taken from the Old Germanic name Raginhari which means counsel and army. Baptismal names began to appear as surnames relatively late in the growth of the naming tradition. This is a little surprising, given the popularity of biblical figures in the Christian countries of Europe. Nevertheless, surnames derived from baptismal names grew in popularity during the Middle Ages, and have become one of the foremost sources for surnames.

Early Origins of the Reynard family

The surname Reynard was first found in Devon where they held a family seat from early times and their first records appeared on the census rolls taken by the ancient Kings of Britain to determine the rate of taxation of their subjects. There is also an entry in the Domesday Book 1086)) listing a Rogerus filius Rainardi, Rainart in Norfolk.

Early History of the Reynard family

This web page shows only a small excerpt of our Reynard research. Another 79 words (6 lines of text) covering the years 1589, 1661 and 1649 are included under the topic Early Reynard History in all our PDF Extended History products and printed products wherever possible.

Before English spelling was standardized a few hundred years ago, spelling variations of names were a common occurrence. Elements of Latin, French and other languages became incorporated into English through the Middle Ages, and name spellings changed even among the literate. The variations of the surname Reynard include Reynard, Reynardson, Renhard, Renyard, Reinard and many more.

Another 31 words (2 lines of text) are included under the topic Early Reynard Notables in all our PDF Extended History products and printed products wherever possible.

Reynard migration to the United States +

Reynard Settlers in United States in the 18th Century

Reynard Settlers in Canada in the 18th Century

Reynard Settlers in Australia in the 19th Century