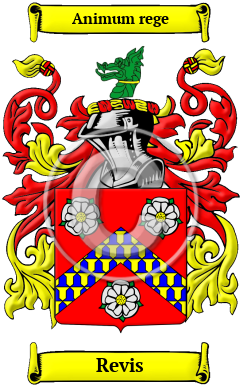 The name Revis is part of the ancient legacy of the Anglo-Saxon tribes of Britain. The name was taken on by someone who worked as a local representative of a lord, a reeve, sheriff, steward or bailiff. [1] [2] The surname Revis was originally derived from the Old English (ge)refa which referred to a representative. [3] The name is "an official appointed by the lord of the manor to supervise his tenants' work." [4]

Early Origins of the Revis family

Early History of the Revis family

Before English spelling was standardized a few hundred years ago, spelling variations of names were a common occurrence. Elements of Latin, French and other languages became incorporated into English through the Middle Ages, and name spellings changed even among the literate. The variations of the surname Revis include Reeve, Reve, Reave, Reaves, Reeves and others.

Distinguished members of the family include Edmund Reeve (1585-1647), English Justice of the Common Pleas, son of Christopher Reeve of Felthorpe, Norfolk; Edmund Reeve (died 1660), English divine, vicar of Hayes-cum-Norwood, Middlesex; Thomas Reeve (1594-1672), English Royalist divine, born at Langley, Norfolk, son of Thomas Reeve, a husbandman; John Reeve (1608-1658), an English plebeian prophet, believed the voice of God had instructed him to found a Third Commission in...
Another 69 words (5 lines of text) are included under the topic Early Revis Notables in all our PDF Extended History products and printed products wherever possible.

In the United States, the name Revis is the 7,873rd most popular surname with an estimated 2,487 people with that name. [7]

Migration of the Revis family to Ireland

Some of the Revis family moved to Ireland, but this topic is not covered in this excerpt.
Another 196 words (14 lines of text) about their life in Ireland is included in all our PDF Extended History products and printed products wherever possible.

Revis migration to the United States +

Revis Settlers in United States in the 19th Century

Revis Settlers in United States in the 20th Century

Revis Settlers in Canada in the 19th Century