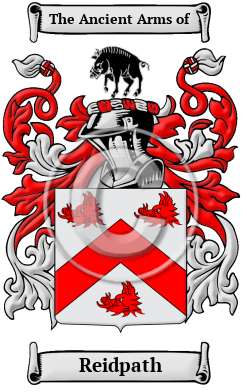 Early Origins of the Reidpath family

The surname Reidpath was first found in Berwickshire where they held a family seat from early times and their first records appeared on the census rolls taken by the ancient Kings of Scotland to determine the rate of taxation of their subjects.

Early History of the Reidpath family

During the era when a person's name, tribe and posterity was one of his most important possessions, many different spellings were found in the archives examined. Reidpath occurred in many references, and spelling variations of the name found included Redpath, Ridpath, Reidpath, Ridpeth, Redpeth and others.

Notable amongst the family name during their early history was Thomas Redpath, Chief of the Clan in 1602. George Ridpath (died 1726), was a Scottish whig journalist who seems to have been born in Berwickshire. His father may have been George Readpath, who inherited land from his father, Thomas, in 1654. Ridpath himself claimed connection with the Gordons. In 1687 Ridpath published a new method of shorthand, 'Shorthand yet Shorter,' with...
Another 71 words (5 lines of text) are included under the topic Early Reidpath Notables in all our PDF Extended History products and printed products wherever possible.

Migration of the Reidpath family to Ireland

Some of the Reidpath family moved to Ireland, but this topic is not covered in this excerpt.
Another 58 words (4 lines of text) about their life in Ireland is included in all our PDF Extended History products and printed products wherever possible.

Reidpath migration to the United States +

Gradually becoming disenchanted with life in Ireland many of these uprooted families sailed aboard the armada of sailing ships known as the "White Sails" which plied the stormy Atlantic. These overcrowded ships often arrived with only 60 to 70% of their original passenger list, many dying of illness and the elements, were buried at sea. In North America, early immigrants bearing the family name Reidpath, or a spelling variation of the surname include:

Reidpath Settlers in United States in the 19th Century

Reidpath Settlers in United States in the 20th Century