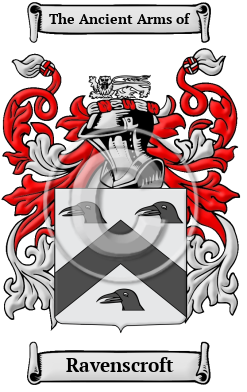 The Anglo-Saxon name Ravenscroft comes from when the family resided in the region of Ravenscroft in Cheshire. Ravenscroft is a topographic surname, which was given to a person who resided near a physical feature such as a hill, stream, church, or type of tree. Habitation names form the other broad category of surnames that were derived from place-names. They were derived from pre-existing names for towns, villages, parishes, or farmsteads. Other local names are derived from the names of houses, manors, estates, regions, and entire counties.

Early Origins of the Ravenscroft family

The surname Ravenscroft was first found in Cheshire where they held a family seat from early times and their first records appeared on the early census rolls taken by the early Kings of Britain to determine the rate of taxation of their subjects.

Early History of the Ravenscroft family

The English language only became standardized in the last few centuries; therefore,spelling variations are common among early Anglo-Saxon names. As the form of the English language changed, even the spelling of literate people's names evolved. Ravenscroft has been recorded under many different variations, including Ravenscroft, Ravenscroff and others.

Distinguished members of the family include Thomas Ravenscroft (ca. 1582- c.1635), English editor, singer at St Paul's Cathedral, composer and music theorist; Ravenscroft, English wigmaker who co-founded Ede & Ravenscroft, the oldest tailors in London in 1689; John Ravenscroft (c. 1665-1697), also known as Giovanni Ravenscroft and Giovanni Rederi, an English violinist and composer; Hall Ravenscroft (ca.1600-ca.1673), an English politician who sat in the...
Another 63 words (4 lines of text) are included under the topic Early Ravenscroft Notables in all our PDF Extended History products and printed products wherever possible.

Ravenscroft migration to the United States +

For many English families, the political and religious disarray that shrouded England made the far away New World an attractive prospect. On cramped disease-ridden ships, thousands migrated to those British colonies that would eventually become Canada and the United States. Those hardy settlers that survived the journey often went on to make important contributions to the emerging nations in which they landed. Analysis of immigration records indicates that some of the first North American immigrants bore the name Ravenscroft or a variant listed above:

Ravenscroft Settlers in United States in the 17th Century

Ravenscroft Settlers in United States in the 18th Century

Ravenscroft Settlers in United States in the 20th Century

Ravenscroft Settlers in Australia in the 19th Century

Ravenscroft Settlers in New Zealand in the 19th Century