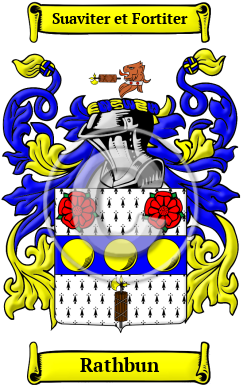 The name Rathbun originated with the Anglo-Saxon tribes that once ruled Britain. It is derived from the baptismal name Rawbone. Patronymic surnames arose out of the vernacular and religious given name traditions. The vernacular or regional naming tradition is the oldest and most pervasive type of patronymic surname. According to this custom, names were originally composed of vocabulary elements from the local language. Vernacular names that were derived from ancient Germanic personal names have cognates in most European languages.

Early Origins of the Rathbun family

The surname Rathbun was first found in Worcestershire where Richard Rathebon was listed in the Subsidy Rolls of 1275. However, Cheshire was a focal point for the family as numerous entries were found there from the 14th century on. John Rathebon was listed there in 1347 [1] and one source notes the name was in: "Cheshire records as Rathebon, does not seem to be English. If the original bearers of the name came from Ireland it answers to the Irish Rathbane, Rathbaun = 'White Fort' [Irish rath, a fort; also palace + bán, white]. If from Wales (as seems more likely), the name prob. means the 'Stumpy Clearing or Plain' [Welsh rhath, a cleared spot, plain (conn. with Irish rath) + Welsh bon, a stock, stump, stem (conn. with Irish and Gaelic bonn, a foundation, base] and is apparently allied to 'Ratisbon.' " [2]

Another source has a slightly different understanding: "this surname is derived from a geographical locality. 'of Ruabon'. There seems little doubt that these surnames hail from Cheshire, also that Ruabon is the parent. The change to Rathbone is peculiar, but perhaps the place-name Ruabon has undergone a change. I furnish an instance of Rawbone from the Prestbury registers (Cheshire) dated 1603. A Thomas Rathbone was living there in 1695." [3]

"There were Rathbones in Prestbury, [Cheshire] 200 years ago. Richard Rathbone was mayor of Chester in 1598, and Thomas Rathbone was sheriff of that city in 1790." [4]

Early History of the Rathbun family

One relatively recent invention that did much to standardize English spelling was the printing press. However, before its invention even the most literate people recorded their names according to sound rather than spelling. The spelling variations under which the name Rathbun has appeared include Rathbone, Rawbone, Rathburn and others.

Distinguished members of the family include William Rathbone II (1696-1746), founder of Rathbone Brothers, in Liverpool a timber business that grew to be one of the United Kingdom's largest firms of wealth managers, thus beginning a long running family of Liverpool merchants and shipowners with a long history of philanthropy and public service. Wilson Rathborne (1748-1831), captain in the navy, son of Richard Rathborne, a clergyman, was born near Loughrea, co. Galway, on 16 July 1748. In September 1763 he was entered as an ‘able seaman’ on board the Niger, with Sir Thomas Adams, on the Newfoundland station. As able seaman and...
Another 268 words (19 lines of text) are included under the topic Early Rathbun Notables in all our PDF Extended History products and printed products wherever possible.

In the United States, the name Rathbun is the 6,841st most popular surname with an estimated 4,974 people with that name. [5]

Rathbun migration to the United States +

At this time, the shores of the New World beckoned many English families that felt that the social climate in England was oppressive and lacked opportunity for change. Thousands left England at great expense in ships that were overcrowded and full of disease. A great portion of these settlers never survived the journey and even a greater number arrived sick, starving, and without a penny. The survivors, however, were often greeted with greater opportunity than they could have experienced back home. These English settlers made significant contributions to those colonies that would eventually become the United States and Canada. An examination of early immigration records and passenger ship lists revealed that people bearing the name Rathbun arrived in North America very early:

Rathbun Settlers in United States in the 17th Century

Rathbun Settlers in United States in the 19th Century

Rathbun Settlers in United States in the 20th Century

Suggested Readings for the name Rathbun +