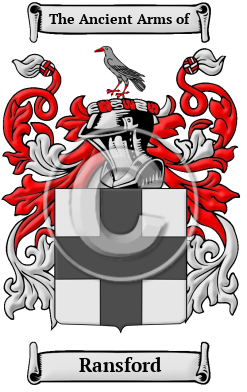 The name Ransford is of Anglo-Saxon origin and came from when a family lived in the chapelry of Rainford in the parish of Prescot in Lancashire. The surname Ransford is a habitation name which forms a broad category of surnames that were derived from place-names. They were derived from pre-existing names for towns, villages, parishes, or farmsteads. In this case the surname Ransford was originally derived from the Old English Regnaforde which refers to those individuals who lived by the ford. However, there is also evidence that the name in fact referred to Danish settlers, who came from Randers Fiord, Denmark.

Early Origins of the Ransford family

The surname Ransford was first found in Lancashire where they were found since ancient times, perhaps even predating the Norman Conquest of England by Duke William of Normandy in 1066 A.D. Early records, and the church cemetery show bearers of the name in Little Crosby, Lancashire.

Early History of the Ransford family

Sound was what guided spelling in the essentially pre-literate Middle Ages, so one person's name was often recorded under several variations during a single lifetime. Also, before the advent of the printing press and the first dictionaries, the English language was not standardized. Therefore, spelling variations were common, even among the names of the most literate people. Known variations of the Ransford family name include Rainford, Rainsford, Raynsford, Raynsforde, Reinsford, Reinsforde, Raynesford, Rainesford, Rainesforde, Ranford, Ranforde, Randsford, Randford, Randeford and many more.

Distinguished members of the family include Sir John Raynsford of Bradfield Hall, Essex; and his son, Sir John Raynsford (by 1482-1559) was an English politician, High Sheriff of Essex and Hertfordshire (1537-1538), Member of Parliament for Colchester in 1529; John Raynsford, an English politician, Member of Parliament (MP) for Colchester during the 16th century; and Sir Richard Rainsford SL (1605-1680), an English...
Another 61 words (4 lines of text) are included under the topic Early Ransford Notables in all our PDF Extended History products and printed products wherever possible.

Migration of the Ransford family to Ireland

Some of the Ransford family moved to Ireland, but this topic is not covered in this excerpt.
Another 51 words (4 lines of text) about their life in Ireland is included in all our PDF Extended History products and printed products wherever possible.

Ransford migration to the United States +

For political, religious, and economic reasons, thousands of English families boarded ships for Ireland, the Canadas, the America colonies, and many of smaller tropical colonies in the hope of finding better lives abroad. Although the passage on the cramped, dank ships caused many to arrive in the New World diseased and starving, those families that survived the trip often went on to make valuable contributions to those new societies to which they arrived. Early immigrants bearing the Ransford surname or a spelling variation of the name include :

Ransford Settlers in United States in the 17th Century

Ransford Settlers in United States in the 18th Century

Ransford Settlers in United States in the 19th Century