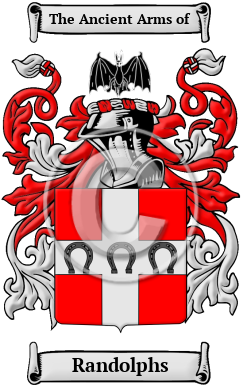 The saga of the Randolphs family name begins among the people of an ancient Scottish tribe called the Picts. The Randolphs name is derived from the personal name, Randolph which contained elements that translated to shield and wolf. Randolphs is a patronymic surname, which belongs to the category of hereditary surnames. Many patronymic surnames were formed by adopting the given name of an ancestor of the bearer, while others came from popular religious names, and from the names of secular heroes.

Early Origins of the Randolphs family

The surname Randolphs was first found in Moray, where they held a family seat from early times and their first records appeared on the early census rolls taken by the early Kings of Britain to determine the rate of taxation of their subjects.

Early History of the Randolphs family

Repeated and inaccurate translation of Scottish names from Gaelic to English and back resulted in a wide variety of spelling variations with single names. Randolphs has appeared Randolph, Randolf and others.

Notable amongst the Clan at this time was Thomas Randolph Moray (d. 1332), the 1st Earl of Moray, companion of Robert Bruce and Regent of Scotland, the only son of Thomas Randolph, lord of Stratnith. His father was Sheriff of Roxburgh in 1266 and from 1266 to 1278 Great Chamberlain of Scotland. His son, John Randolph (died 1346) the third Earl of Moray was the second son of Thomas Randolph, first Earl of Moray. He succeeded to the earldom on the...
Another 80 words (6 lines of text) are included under the topic Early Randolphs Notables in all our PDF Extended History products and printed products wherever possible.

Migration of the Randolphs family

Many Scottish families suffered enormous hardships and were compelled to leave their country of birth. They traveled to Ireland and Australia, but mostly to the colonies of North America, where many found the freedom and opportunity they sought. It was not without a fight, though, as many were forced to stand up and defend their freedom in the American War of Independence. The ancestors of these Scots abroad have rediscovered their heritage in the last century through the Clan societies and other organizations that have sprung up across North America. Immigration and passenger ship lists show some important early immigrants bearing the name Randolphs: Milward Randolph, who arrived in Virginia in 1621; Edward Randolph, who arrived in Barnstable, MA in 1630; Henry Randolph, who came to Virginia in 1642.