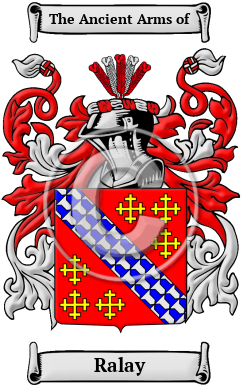 The Anglo-Saxon name Ralay comes from when the family resided in the village of Raleigh in the county of Devon. This place-name was originally derived from the Old English ra leah meaning a meadow for deer. [1]

Early Origins of the Ralay family

The surname Ralay was first found in Devon where one of the first records of the name was William de Raley (or William de Ralegh or William Raleigh) (died 1250) a medieval judge, administrator and bishop. Born in Devon, he became Bishop of Winchester, "but it is doubtful to which of the four branches of the Devonshire Raleighs he belonged. In 1212 he was presented by King John to the church of Bratton, and was employed in judicial business in Lincolnshire and Cumberland in 1226-1227." [2]

"According to Fuller, they derived their name from 'a well-known town' in that county. I cannot discover any town, or even village, so called." [3]

However another source provides more clues about the bishop's origin: "Ralegh, Bishop of Winchester, 1244, was born at Ralegh, in the parish of Pilton, the original seat of this famous family. " [4]

The Hundredorum Rolls of 1273 list the following: Hugh de Ralegh in Devon; and Warin de Raleghe in Somerset. [5]

Early History of the Ralay family

Before English spelling was standardized a few hundred years ago, spelling variations of names were a common occurrence. Elements of Latin, French and other languages became incorporated into English through the Middle Ages, and name spellings changed even among the literate. The variations of the surname Ralay include Raleigh, Rawleigh, Rawley, Rawle, Rawles and others.

Notables of this surname at this time include: Sir Walter Raleigh (1552-1618), a court favorite of Queen Elizabeth I, known for his expeditions to the New World; and his second son, Walter Raleigh or Ralegh (1586-1646), an English divine, Dean of Wells from 1641 until his death in a scuffle; and Carew Raleigh or Ralegh (1605-1666), first son of Sir Walter Raleigh...
Another 62 words (4 lines of text) are included under the topic Early Ralay Notables in all our PDF Extended History products and printed products wherever possible.

Migration of the Ralay family to Ireland

Some of the Ralay family moved to Ireland, but this topic is not covered in this excerpt.
Another 97 words (7 lines of text) about their life in Ireland is included in all our PDF Extended History products and printed products wherever possible.

Migration of the Ralay family

A great wave of immigration to the New World was the result of the enormous political and religious disarray that struck England at that time. Families left for the New World in extremely large numbers. The long journey was the end of many immigrants and many more arrived sick and starving. Still, those who made it were rewarded with an opportunity far greater than they had known at home in England. These emigrant families went on to make significant contributions to these emerging colonies in which they settled. Some of the first North American settlers carried this name or one of its variants: Sarah Rawleigh settled with her husband in Virginia in 1663; Mary Rawles settled in Virginia in 1653; Elizabeth Rawleigh settled in Pennsylvania in 1772.