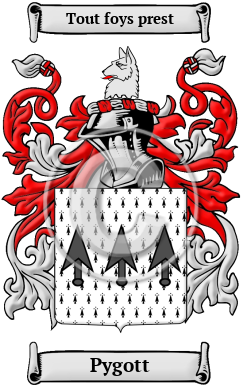 Today's generation of the Pygott family bears a name that was brought to England by the wave of emigration that was started by the Norman Conquest of 1066. It comes from the Old English given name Picot or Pigot. The surname Pygott was originally derived from the Old English word pic, meaning a hill with a sharp point at its top, and would originally have indicated that its bearer lived near such a landmark.

"Picot was a personal name is clear, for Picot, a chief tenant in Hampshire, and Picot de Grentebrig', both occur in Domesday [Book]. It is curious, too, to observe that two families in Cheshire, the Pigots and Pichots, ran side by side for some generations, and Dr. Ormerod long ago surmised that both sprang from one common ancestor - Gilbert Pichot, Lord of Broxton." [1]

Another source notes that "the name of Pickett may be a corruption of Pickard, though we must remember that there is an estate of this name in the parish of South Perrott, Dorset." [2]

Early Origins of the Pygott family

The surname Pygott was first found in Cheshire and Cambridgeshire where Picot of Cambridge (c.1022-1090), born in Saye, Normandy, was a Norman landowner and rose to become Sheriff of Cambridgeshire (c. 1071-1090.) His son Robert, became implicated in a conspiracy against King Henry I, fled the country and the family estates were forfeit. [3] "Pygot occurs in Leland's supposed copy of the Roll of Battle Abbey." [4]

Another reference claims "the family originally came from Cheshire; William Pigott of Butley in the parish of Prestbury in that county, who died in 1376, was grandfather of Richard Pigott of Butley who married the heiress of Peshall." [5]

Early History of the Pygott family

Spelling variations in names were a common occurrence in the eras before English spelling was standardized a few hundred years ago. In the Middle Ages, even the literate regularly changed the spellings of their names as the English language incorporated elements of French, Latin, and other European languages. Many variations of the name Pygott have been found, including Pigott, Piggot, Piggett, Piggott, Piggot, Pigot, Picot and many more.

Outstanding amongst the family at this time was Thomas Pigot (Pigott, Piggott) (1657-1686), an English cleric, academic and Fellow of the Royal Society; George Pigot, 1st Baron Pigot (1719-1777), former...
Another 29 words (2 lines of text) are included under the topic Early Pygott Notables in all our PDF Extended History products and printed products wherever possible.

Migration of the Pygott family to Ireland

Some of the Pygott family moved to Ireland, but this topic is not covered in this excerpt.
Another 31 words (2 lines of text) about their life in Ireland is included in all our PDF Extended History products and printed products wherever possible.

Pygott migration to the United States +

For many English families, the social climate in England was oppressive and lacked opportunity for change. For such families, the shores of Ireland, Australia, and the New World beckoned. They left their homeland at great expense in ships that were overcrowded and full of disease. Many arrived after the long voyage sick, starving, and without a penny. But even those were greeted with greater opportunity than they could have experienced back home. Numerous English settlers who arrived in the United States and Canada at this time went on to make important contributions to the developing cultures of those countries. Many of those families went on to make significant contributions to the rapidly developing colonies in which they settled. Early North American records indicate many people bearing the name Pygott were among those contributors:

Pygott Settlers in United States in the 17th Century