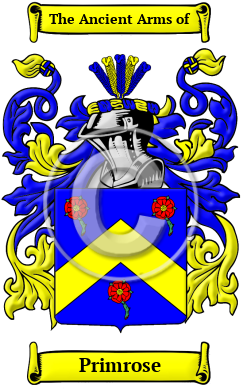 The Primrose surname is generally thought to be habitational name taken on from a place in Fife, originally named Prenrhos. This place name comes from the Welsh words "pren," meaning "tree"’ and "rhos," meaning "moor." It thought that only later came an association with the name of the Primrose flower.

Early Origins of the Primrose family

The surname Primrose was first found in Fife, where they held a family seat from early times and their first records appeared on the early census rolls taken by the early Kings of Scotland to determine the rate of taxation of their subjects.

Early History of the Primrose family

Spelling variations of this family name include: Primrose, Prymerose and others.

Notable amongst the family at this time was Gilbert Primrose (c. 1580-1641), Scottish divine, son of Gilbert Primrose, principal surgeon to James VI. The family belonged to Culross, Perthshire, and his father was elder brother of Archibald Primrose, from whom the earls of Rosebery descend. James Primrose (dies 1641), was Clerk of the Privy Council of Scotland, the second son of Archibald Primrose of Culross and of Burnbrae, Perthshire. James Primrose or Primerose (died 1659), was a Scottish...
Another 78 words (6 lines of text) are included under the topic Early Primrose Notables in all our PDF Extended History products and printed products wherever possible.

Primrose migration to the United States +

Primrose Settlers in United States in the 18th Century

Primrose Settlers in United States in the 19th Century

Primrose Settlers in Australia in the 19th Century