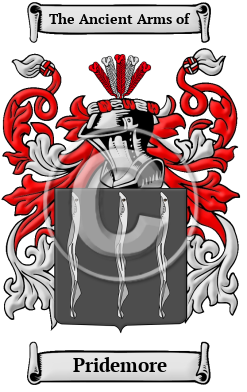 Early Origins of the Pridemore family

The surname Pridemore was first found in Lanarkshire (Gaelic: Siorrachd Lannraig) a former county in the central Strathclyde region of Scotland, now divided into the Council Areas of North Lanarkshire, South Lanarkshire, and the City of Glasgow, where they held a family seat. Originally believed to be a junior branch of the Prideaux family, of which the senior branch was descended from Pagenus de Prideaux of Prideaux Castle in Cornwall. The junior branch was granted lands in Larnarkshire, Scotland about 1140 by King David of Scotland. Several of the name Prid or Pryde were registered in the area in the late 13th century.

Early History of the Pridemore family

This web page shows only a small excerpt of our Pridemore research. Another 92 words (7 lines of text) covering the years 1272, 1296, 1521, 1567, and 1650 are included under the topic Early Pridemore History in all our PDF Extended History products and printed products wherever possible.

Spelling variations of this family name include: Pryde, Pride, Prid, Pryd and others.

Another 34 words (2 lines of text) are included under the topic Early Pridemore Notables in all our PDF Extended History products and printed products wherever possible.

In the United States, the name Pridemore is the 7,307th most popular surname with an estimated 4,974 people with that name. [1]

Pridemore Settlers in Australia in the 19th Century