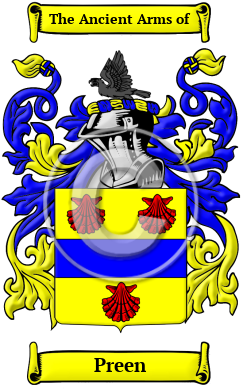 There is a debate as the the origin of this family. One source claims the name is a nickname, as in "Pryne, chief, first." [1] Another source agrees, stating the name was derived from the Old French word "prin", (Latin primus) ‘first, superior; small, slender’. [2]

Another source claims the family originated in Cornwall and "were formerly called Resprynn, and they are supposed to have originated from Resprynn, an estate in the parish of Lanhydrock." [3]

Early Origins of the Preen family

The surname Preen was first found in Worcestershire where they held a family seat as Lords of the Manor. The family name was first referenced in the year 1275 when Matilda Pryn held estates in that shire. In the same year, William Prin was listed in the Hundredorum Rolls for Berkshire and later, Nicholas Prinne was found in the Subsidy Rolls for Sussex in 1327. [2]

Revisiting the aforementioned Cornish origin, another branch of the family was found in Bodrean, Cornwall as "the seat of Henry Prynn Andrew, Esq. was acquired by his alliance with the family of Prynn." [4]

Early History of the Preen family

Spelling variations of this family name include: Prin, Prinn, Pryn, Prynn, Prynne and others.

Another 36 words (3 lines of text) are included under the topic Early Preen Notables in all our PDF Extended History products and printed products wherever possible.

Preen migration to the United States +

Preen Settlers in United States in the 19th Century

Preen Settlers in Australia in the 19th Century