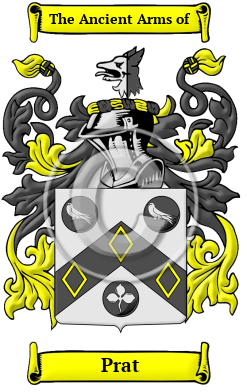 The ancient Anglo-Saxon culture once found in Britain is the soil from which the many generations of the Prat family have grown. The name Prat was given to a member of the family who was a trickster; for a practical joker. Further research revealed that the name is derived from the Old English word prætt, which meant "a trick" or alternatively "cunning and astute." A broad and miscellaneous class of surnames, nickname surnames referred to a characteristic of the first person who used the name. They can describe the bearer's favored style of clothing, appearance, habits, or character. Nickname surnames were frequently the result of a spontaneous reaction to a particular occasion or event. It is possible that the name was given to the original bearer as the result of a particularly brilliant and wildly successful practical joke.

Early Origins of the Prat family

The surname Prat was first found in Essex but the name originally comes from Normandy where it is derived from the place name Pratum, or Pré, near Lisieux where Duke Richard gave lands to Fontanelles Abbey in 1024. Again in Normandy, Richard and Robert de Prato were listed in 1198 but another branch of the family were found in Essex in 1199 where Roger de Prato was listed at that time. Hervery de Prato was King John's "faithful knight" in 1200 and Rouen Castle was given to his brother for his services. [1]

We draw the reader's attention to the church in the parish of Ryston in Norfolk. "The church is chiefly in the decorated English style, and contains numerous monuments to the Pratt family, including one to Lady Pratt, whose figure, in a reclining posture, is beautifully sculptured in white marble." [2]

Early History of the Prat family

Sound was what guided spelling in the essentially pre-literate Middle Ages, so one person's name was often recorded under several variations during a single lifetime. Also, before the advent of the printing press and the first dictionaries, the English language was not standardized. Therefore, spelling variations were common, even among the names of the most literate people. Known variations of the Prat family name include Pratt, Pratte, Prat and others.

Notables of the family at this time include Sir Roger Pratt (1620-1684), an English gentleman-architect, best known for his work on Clarendon House, London (1664-1667.) Sir John Pratt (1657-1725), was an English judge, son...
Another 32 words (2 lines of text) are included under the topic Early Prat Notables in all our PDF Extended History products and printed products wherever possible.

In France, the name Prat is the 464th most popular surname with an estimated 9,436 people with that name. [3]

Migration of the Prat family to Ireland

Some of the Prat family moved to Ireland, but this topic is not covered in this excerpt.
Another 83 words (6 lines of text) about their life in Ireland is included in all our PDF Extended History products and printed products wherever possible.

Prat migration to the United States +

For political, religious, and economic reasons, thousands of English families boarded ships for Ireland, the Canadas, the America colonies, and many of smaller tropical colonies in the hope of finding better lives abroad. Although the passage on the cramped, dank ships caused many to arrive in the New World diseased and starving, those families that survived the trip often went on to make valuable contributions to those new societies to which they arrived. Early immigrants bearing the Prat surname or a spelling variation of the name include :

Prat Settlers in United States in the 16th Century

Prat Settlers in United States in the 17th Century

Prat Settlers in United States in the 19th Century